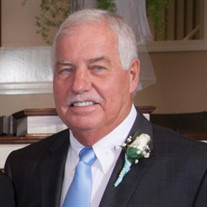 Lynn Rickman departed this life on Saturday, May 8, 2021, at the age of 81 years and 28 days. He was born in Milledgeville, Tennessee, on April 10, 1940, the son of the late Otis and Margie Stanford Rickman. On March 6, 1998, he was united in marriage to Nancy Williams May, who survives. Lynn received a bachelor's degree in physical education from Lambuth University. Throughout his career, "Coach Rickman", coached basketball at Whiteville, Tennessee, Orlando, Florida, and Savannah, Tennessee, where he coached at the elementary, middle school and high school levels. His coaching career spanned 44 years. He was an umpire for Little League, Babe Ruth, and minor league adult baseball. His skills were utilized for the Jackson Diamond Jaxx games and during the Dixie Youth World Series. Lynn loved the St. Louis Cardinals and enjoyed UT sports. He was a member of the First Baptist Church in Savannah, Tennessee and a member of the TSSAA Officials Association. In addition to his wife, Nancy May Rickman of Savannah, Tennessee; Lynn is survived by his children, Marla Hartsook and her husband Casey of Lenoir City, Tennessee and Brent Rickman and his wife Rita of Kingston, Tennessee; stepson, Chris May and his wife Bellis of Savannah, Tennessee; son-in-law, Mike Taylor of Jackson, Tennessee; grandchildren, Chase Hartsook, Alden Hartsook, Emma Hartsook, Michael Taylor, Cade Taylor, and Haley Rickman; step grandchildren, Lilly May and Audrey May; sisters, Rita Thomas and her husband Joe of Valdosta, Georgia and Dianne Newell and her husband Jerry of Selmer, Tennessee; and sisters-in-law, Donna Rickman of Atlanta, Georgia, Jean Rickman of Orlando, Florida, and Joyce Rickman of Savannah, Tennessee. Along with his parents, Lynn was preceded in death by his daughter, Jerrie Lynn Taylor; stepson, Brian May; and brothers, Wayne Rickman, Neal Rickman, and Royce Rickman.

The family of Lynn Rickman created this Life Tributes page to make it easy to share your memories.

Send flowers to the Rickman family.