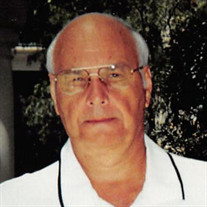 Mac Arthur Vaughn, age 79, of Middleton, passed from this life on Tuesday afternoon, October 26, 2021, in Jackson, TN. He was born on Thursday, February 26, 1942, in McNairy County, to the late Loyd James Vaughn and Martha Russell Vaughn. A 1960 graduate of McNairy Central High School, he married the former Gail Casey on February 18, 1966 and spent his entire adult life in Middleton. Mr. Vaughn was a real estate appraiser for the Bank of Middleton for over 40 years and also had been an insurance agent for Mr. Frances Simpson. Mac, as he was known to many, was a Hardeman County Commission member since 1995. As young man, he served his community in the Jaycees and helped coach youth baseball. Mr. Vaughn was baptized at and became a member of the Middleton Church of Christ in 2018. An avid sports fan, he enjoyed University of Memphis basketball and playing golf. Mr. Vaughn was a successful coin collector and trader and liked traveling to the Smoky Mountains and walking the nature trails there. He could often be found visiting with friends and colleagues at the coffee shop in Middleton or at JP Shelly and Sons store. Above all, he loved playing with his grandchildren. He leaves his wife of 55 years, Gail Vaughn of Middleton; daughter, Gina (Lloyd) Inlow of Bolivar; son, Bryan Vaughn of Memphis; four sisters, Gloria (Kenneth) Moore of Selmer, Ann Knight of Pocahontas, Debbie (Terry) Kirk of Adamsville and Judy (James) Hopper of Pocahontas; two brothers, David Vaughn of Pocahontas and Reese Vaughn of Ramer; and four grandchildren, Casey Inlow and Brandon, Sara and Matthew Vaughn. In addition to his parents, he was preceded in death by a sister, Peggy Dixon; and two brothers, James and Arnie Vaughn. Memorials may be sent to the Essary Springs Cemetery Fund, c/o Gail Vaughn, P. O. Box 31, Middleton, TN 38052.

Mac Arthur Vaughn, age 79, of Middleton, passed from this life on Tuesday afternoon, October 26, 2021, in Jackson, TN. He was born on Thursday, February 26, 1942, in McNairy County, to the late Loyd James Vaughn and Martha Russell Vaughn.... View Obituary & Service Information

The family of Mac Arthur Vaughn created this Life Tributes page to make it easy to share your memories.

Mac Arthur Vaughn, age 79, of Middleton, passed from this life...

Send flowers to the Vaughn family.