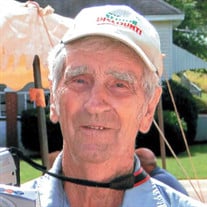 Mancel Grant Kirk was born April 17, 1924 in Finger, TN the son of the late Elbert and Musette Massengill Kirk. He was united in marriage to Faye Marie Carpenter on November 27, 1948. She preceded him in death on January 20, 1993. He was later married to Tommye Graves, who preceded him in death on May 24, 2000. Mr. Kirk was a distinguished World War II veteran of the United States Army, having served in North Africa and Italy for 21 months as a member of Company G, 168th Infantry, 34th Division. He served as a squad leader and platoon sergeant and was among the first troops to enter Rome on June 5, 1944 following the Anzio beachhead breakout. He was awarded 4 Battle Stars and was proud that his division was the one to relieve the division in which Audie Murphy fought-he always wondered if he might have slept in Audie's foxhole. Approximately eight years ago Mr. Kirk was interviewed by the World War II Museum in New Orleans, LA for a documentary regarding his role in the 34th Infantry Division. The documentary may be viewed here: https://www.ww2online.org/view/mancel-kirk. At the time of his death Mr. Kirk was one of only three survivors from the 34th Infantry Division. Mr. Kirk lived his entire life in the Finger, TN area, where he farmed and operated the Finger Service Station for many years. He was a substitute delivery driver on the Finger mail route for 20 years, and served on the Quarterly Court for 10 years. He enjoyed traveling with the Senior Citizens group and attending the Finger Dance and Picnic. Mr. Kirk was a member of the Meeks Grove Freewill Baptist Church. Mr. Kirk departed this life on January 14, 2021 in Jackson, Tennessee at the age of 96 Years, 8 Months, 28 Days. He is survived by a son, Lonnie Kirk of Finger, TN; a special friend, Ima Jean Johnson; and many extended family and friends. In addition to his parents and spouses, Mr. Kirk was preceded in death by two sisters, Burnell Langdon and Audie Horton, and a granddaughter, Mandy Kirk.

Mancel Grant Kirk was born April 17, 1924 in Finger, TN the son of the late Elbert and Musette Massengill Kirk. He was united in marriage to Faye Marie Carpenter on November 27, 1948. She preceded him in death on January 20, 1993. He was... View Obituary & Service Information

The family of Mancel Grant Kirk of Finger, TN created this Life Tributes page to make it easy to share your memories.

Send flowers to the kirk family.