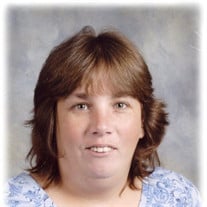 Marcia Wylie Marcia Lynn Wylie was born October 9, 1975 in Lawrenceburg, TN, the daughter of the late John Franklin and Margaret Nell Wylie. Miss Wylie departed this life on Sunday, October 3, 2021 at the age of 45 Years, 11 Months, 24 Days. She is survived by life partner, Robbie Povlock, of Lawrenceburg, TN, brothers, Lance Wylie, wife, Mary Beth and Steve Moore, wife, Kristy all of Waynesboro, TN; aunts, Frances Staggs of Waynesboro, TN, and Billie Ann Robbins of Lutts, TN; nieces and nephews, Erica Pigg, Gracie Wylie, Nathan Moore and Jacob Wylie. In addition to her parents, Miss Wylie was preceded in death by grandparents, Billy and Jewel Melson Stricklin and Bill and Mary Wylie. At the request of her family her remains will be cremated. A memorial service will be Tuesday, October 6, 2021 at 1 pm at Shackelford Funeral Directors Chapel, Waynesboro, TN. A memorial visitation will be Tuesday, October 5, 2021 from 5 pm to 9 pm and Wednesday, October 6, 2021 from 9 am to service time at the funeral home. Shackelford Funeral Directors of Wayne County will be assisting the family.

The family of Marcia Lynn Wylie, Lawrenceburg, TN created this Life Tributes page to make it easy to share your memories.

Send flowers to the Wylie family.