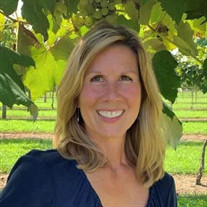 Maria Christina Ramirez Engel was born October 12, 1963 in Fort Campbell, KY the daughter of Hilario "Johnny" Pena and Helen Rosalie Copeland Ramirez. Before moving to Waynesboro, she lived in the Panama Canal Zone,Ft. Bragg, NC and the suburbs of Dallas, TX. She was a member of the LakePointe Church in Rockwall, TX. While living in Waynesboro, she attended the Upper Green River Baptist Church. She loved studying God's Word and wanted others to do the same. She departed this life on January 7, 2022 in Waynesboro, Tennessee at the age of 58 Years, 2 Months and 26 Days. She is survived by her parents, Johnny and Helen Ramirez of Waynesboro, TN; a son, Brandon Keith Bailey of Malden, MA: two sisters Lisa Thompson of Waynesboro, TN and Celia Hampton (Allen) of Columbia, TN. She is also survived by nieces Britnee Thompson, Brooke Thompson, Lynn Hampton Scott (Jarrett) and Bethany Hampton; nephews Andrew Hampton, Matthew Hampton and Chase Brison and a great neice Alma Rosalie Scott She is proceded in death by her grandparents, Almon and Mary Copeland and Hilario and Lenora Ramirez. A Graveside Service will be held on Monday January 10, 2022 at 10:00 AM at the Memorial Gardens in Waynesboro, Tennessee with Jerry Flippo and David Miller officiating. Shackelford Funeral Directors of Wayne County Assisting. Those honored to serve as pallbearer include: Andrew Hampton, Matthew Hampton, Chase Brison, Nathan Durren, Jarret Scott, Duane White and an Honorary pallbearer, Allen Hampton In lieu of flowers, the family request memorial donations be made to the American Family Radio.

The family of Maria Christina Ramirez Engel of Waynesboro, TN created this Life Tributes page to make it easy to share your memories.