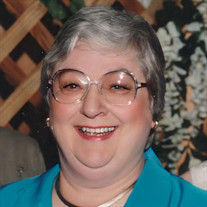 Jacks Creek, TN: Rosalind Marie Moore Coady, age 81, was born in Jackson, TN on March 4, 1939, and passed away at home on February 18, 2021. She was the daughter of the late Edward Malcolm Moore and Alma Latham Moore. Marie married Joe E. Coady in 1960, and they made their home in Jack’s Creek, TN for their entire married lives. They had three children: Don A. Coady of Martin, TN, Beth Coady (Mike) Nash of Jack’s Creek, TN, and Mark A. Coady, of Nashville, TN. She was a member of Unity Baptist Church in Jack’s Creek, TN. She was an avid gardener, loved researching family genealogy, and enjoyed cooking, sewing, listening to music, and reading. She loved to travel and became a devoted fan of her favorite football teams. Her greatest joy was found in spending time with her family. She is survived by her children Don, Beth, and Mark; grandchildren Megan E. Wadley and D. Caleb Wadley, both of Jack’s Creek, TN; and great-grandchildren Coady Wadley and Elora Hensley; and a brother, James E. Moore of Beech Bluff, TN. She was preceded in death by her parents Edward and Alma, her husband Joe, and her brother H.E. Moore. Due to continuing COVID recommendations in limiting groups, there will be no public funeral service for Mrs. Coady. In lieu of flowers, donations in her memory can be made to Unity Baptist Church in Jack’s Creek.

The family of Marie Moore Coady - Jacks Creek created this Life Tributes page to make it easy to share your memories.

Send flowers to the Coady family.