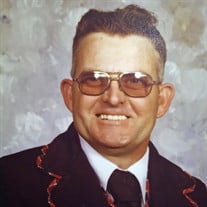 Mr. James passed away Wednesday morning at Henderson Health Center in Henderson, TN. He was born in Benton Co., MS, the son of the late M. R. and Lee Etta Ray James. He is also preceded in death by three sisters, Mary Etta Call, Annie Lou Glover and Gladys M. Ennis; three brothers, Jerry, Sammy and Edward Lee James; and a step-son, Randall Gentry. He married Elsie May Wiggins Gentry on June 14, 1998 and was a retired truck driver. He also had served as minister of Gentry's Chapel Holiness Church and was presently a member at Forrest Hill Pentecostal Church just east of Bolivar. He lived 40 years in Madison County before returning here in 1994. Mr. James had been a former constable for Madison County and, also, narcotics officer for the State of Tennessee. He was a member of the Fraternal Order of the Police and the Madison County Sheriff's Association. He served, as well, in the Tennessee National Guard. He leaves his wife, Elsie May Gentry James of Bolivar; step-son, Jason Gentry (Elizabeth) of Bolivar; two sisters, Judy May Johnson of Friendship, TX and Dorothy Hopper of Faulkner, MS; two brothers, Herman James of Ashland, MS and Wayne James of Ripley, MS; and three step-grandchildren, Christopher Grantham, Jordan Gentry and Leah Gentry. While visiting or attending services for Mr. James, please consider the following guidelines: * Maintain 6 feet between yourself and the next closest person; * Refrain from hugs and handshakes; * When you sneeze or cough, use your elbow to cover your nose and mouth; * Wash your hands often; * Avoid touching your face; and * Minimize time spent in places where people gather. Thank you for your thoughtfulness and consideration

The family of Marion Jesse "M. J." James created this Life Tributes page to make it easy to share your memories.

Send flowers to the James family.