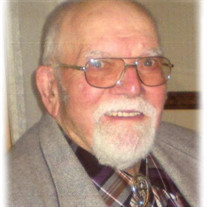 Martin Edward Duesterhoeft of Collinwood, TN was born November 21, 1924 in Lynn Township, McLeod County, MN the son of the late Julius and Friederike (Otto) Duesterhoeft. He passed away on December 10, 2020 at Boyd Cottages Assisted Living in Waynesboro, TN. He was baptized into the family of God at home on November 26, 1924.Mr. Duesterhoeft graduated High School in 1942 at Zion Parochial School in Lynn Township, MN where he was co-captain of the basketball team and was involved in the local FFA. In 1946 he was drafted into the Army and served his country until 1947 being honorably discharged. He was a member of the American Legion Post 254 in Collinwood, TN. Mr. Duesterhoeft was united in marriage to Fern Coffin on June 4, 1948 until her passing on January 16. 1991. Mr. Duesterhoeft was again united in marriage to Clara Nell Pigg on August 25, 1992 until her passing August 29, 2014. He was a member of the Appaloosa Horse Club, director of the Minnesota Breeders Association and Treasurer of the West Lynn Coop Creamery for 30 years. Mr. Duesterhoeft was a lifetime member of Zion Evangelical Lutheran Church and a member of Our Redeemer Lutheran in Florence, AL. He was a dairy farmer, and enjoyed fishing, bowling, playing cards, watching sports and most of all visiting family and friends. He is survived by stepson Travis Pigg and wife Debbie; step-daughter Margaret Thompson and husband Eddie, Step-Grandchildren Madonna Thompson, Shelaine Powell, William Pigg and Stephine Pigg; Step-great-grandchildren Cayden Powell, Saydee Powell, Griffin Pigg and Brilea Pigg In addition to his parents, Mr. Duesterhoeft was preceded in death by his siblings. His remains will be interred in the Zion Evangelical Lutheran Church in Hutchinson, MN.

The family of Martin Edward Duesterhoeft, Collinwood, TN created this Life Tributes page to make it easy to share your memories.

Send flowers to the Duesterhoeft family.