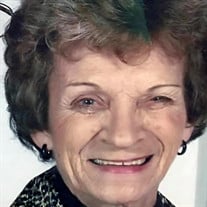 Mary Jean Jordan, 85, of Silerton, departed this life Monday, March 1, 2021 at Pine Meadows Healthcare and Rehabilitation Center. She was born May 28, 1935, in Burlington, Washington, daughter of the late Ben G. and Alice Zoberst Gardner. She married John Howard Jordan on October 8, 1958 in Oakland, California and became in his words, 'the best Navy wife, supporting him for 22 years.' The Jordan's moved to this area in the 1970's and she was a homemaker, raising their children and being active in the community, including knitting Christmas stockings for anyone. She also enjoyed cooking and was very involved in Piney Grove Baptist Church and dearly loved her family. Mrs. Jordan was a member of Piney Grove Baptist Church since the early 1970's. In addition to her husband, survivors include a daughter, Jackie D. Henson of Whiteville; a son, Johnny A. Jordan of Silerton; a sister, Diane Nelson (Larry) of Desert Aire, WA; four grandchildren, Telisa Malone (Jeremy), Paul Wooten, Jordan Henson and Jessica Henson; and two great grandchildren, Karissa and Kara Malone. In addition to her parents, she was preceded in death by a son in law, Billy Joe Henson in 2019; and two brothers, Bob and Duane Gardner. Memorial contributions in her name may be sent to Piney Grove Baptist Church or the Silerton Fire Department.

The family of Mary Jean Jordan created this Life Tributes page to make it easy to share your memories.