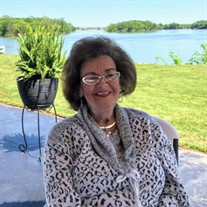 Mary Nell Guinn White, age 84, passed away Wednesday, June 8, 2022 at her residence in Savannah, TN. She was born July 15, 1937, in Savannah, TN. She was the daughter of the late Edwin DeFord Guinn and the late Kate Godwin Guinn. Mrs. White was raised in Henderson, TN and graduated from Chester County High School in 1954. Upon graduation from high school she attended Freed Hardeman College and Memphis State University where she graduated with a degree in Business. She was a member of the Alpha Delta Pi Sorority, DeSoto Beauty Queen, and Sigma Chi Sweetheart. She went on to teach 5th grade at Vollentine Elementary School until her daughter, Lisa, was born in December 1964. After relocating to Houston, TX, for several years, she moved to Henderson in 1972 where she began her career with Chickasaw Area Development Agency, now Southwest Human Resource Agency in the Head Start Education Program. Upon her retirement in 2000 she was the Director of Head Start over several counties in West Tennessee. She was a member of the Henderson Church of Christ. She married Simon H. White of Savannah, TN in December of 1988. They resided in Savannah and she continued to maintain her home in Henderson as well. Mr. White preceded her in death in 2006. She is survived by her daughter, Lisa Guinn Johnson Thomas and her grandson, Ethan Joyner Thomas, both of Memphis, TN; a niece, Dr. Mary Ann Guinn of Henderson, TN; her in-laws, Mr. & Mrs. John H. White, III of Savannah, TN and a nephew, Mr. John H. White, IV of Huntsville, AL. She was pre-deceased by her parents, Mr. & Mrs. Edwin DeFord Guinn and her brother, Dan McCain Guinn. Funeral services will be 2:00 PM Tuesday June 14th at Shackelford Funeral Directors – Crook Avenue Chapel, Henderson, TN, with Dr. Billy Smith officiating. Burial will follow at Henderson City Cemetery. The family will receive friends beginning at 11:00 AM Tuesday, June 14, 2022. In lieu of flowers, memorials may be made to Madonna Learning Center, 7007 Poplar Avenue, Germantown, TN 38138, 901-752-5767. Shackelford Funeral Directors Henderson, Tennessee 731-989-2421

The family of Mary Nell Guinn White created this Life Tributes page to make it easy to share your memories.