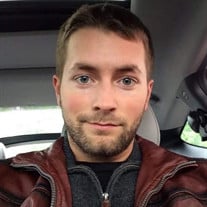 Matthew Stephen Locke entered this world by way of Selmer, Tennessee on March 6, 1991; at the time his parents, Lisa and Kevin, had no idea what life was about to become. Growing up, Matt always managed to surprise them with his MacGyver-like instincts. They couldn’t keep a roll of duct tape—or any other kind, for that matter—around for very long. At the age of 13 he managed to build a pistol out of Legos with a slide that would eject a Lego “shell” as well as a fort in the woods behind his house, complete with actual booby-traps designed to protect his hard work. He was the problem solver of the family, the one who convinced his sister Autumn she really could ride her bike by drinking the “magic balancing water” he just happened to find inside. Matt graduated from high school and eventually entered the Army National Guard which led to his deployment to Afghanistan from May of 2013 to February of 2014. Upon returning he took a job with the McNairy County Justice Complex. They sent him to the police academy and soon after graduation he started working with the McNairy County Sheriff’s Department. A stint with the Adamsville Police Department was followed by six months to a year in Memphis as a successful recruiter for the military before he returned home and joined the Hardin County Sheriff’s Department. He loved his work with law enforcement and he loved being able to serve his country in the Guard. But there were so many other things Matt enjoyed, motorcycle riding being one. His mother taught him how, and gifted him with the same love of crotch-rockets she had. He was a fantastic artist . . . but never on demand. Always neat and clean in appearance, Matt would go to his daughter’s school and walk the halls, visiting with the kids and making his little girl’s face beam with pride. Riley was definitely the apple of his eye and his spitting image. A competitive shooter, Matt would often attend competitions with the National Guard—competitions he always won. He loved being outdoors and trained rigorously for his time in the Guard, often running while wearing a 70 pound vest. He was in the process of qualifying for sniper school, something he looked forward to even though it meant a reduction from his rank of E6 to E5. Despite Matt’s seemingly tough exterior, he had a tender side and a dry sense of humor that those closest to him were allowed to see—that, and a love of Taylor Swift music that anyone who ever rode with him knew all about. A wonderful son, father, and brother, he tried to take care of everyone. Matt had met his soulmate, Natasha Sagely, someone he loved to cook for, to dance with, and with whom he could spend the night laughing. They enjoyed all the same things, from running and riding motorcycles to working out at the gym. Every spare minute was spent together; they truly completed each other and were happiest during those times. Matt was the ultimate soldier and officer, a man who gave his life the night of Saturday, September 25, 2021 while trying to save someone else’s. He leaves behind the love of his life, his daughter and “little twin” Riley Rouge Locke; his parents Lisa and Galen Benson and Lee and Kevin Locke; his siblings Bobby Kenneth Locke, Autumn Nicole Locke, Jake Benson, Nathan Allen Mizell, and Jessika Nichole Mizell; his grandparents Mary Sanford and her husband Gary, Bobbie Locke, Wanda Kay Roberts, and Otha Ray Benson; and a host of aunts and uncles, including Tim Locke. Matt is also survived by his best friend, Kevin Thompson, his shift partner James Damron, and all his law enforcement and National Guard brothers. The family would also like to thank Sheriff's Deputy Damron and Officer Timmy Dale Harris of the Clifton Police Department who did all they could that night to save Matt’s life. He was preceded in death by his grandparents Kenneth Eugene Foust and Doris Benson and his great-grandmother Cordie Bonee. Matthew Stephen Locke was as close to perfect as one person could be, and will be greatly missed by all who were privileged to know him. To quote Matt’s dad Kevin, “He was the best in all of us”. Funeral services will be live streamed through the Savannah Church of Christ's Facebook Page: https://www.facebook.com/SavannahChurchofChrist

Matthew Stephen Locke entered this world by way of Selmer, Tennessee on March 6, 1991; at the time his parents, Lisa and Kevin, had no idea what life was about to become. Growing up, Matt always managed to surprise them with his MacGyver-like... View Obituary & Service Information

The family of Matthew Locke created this Life Tributes page to make it easy to share your memories.

Send flowers to the Locke family.