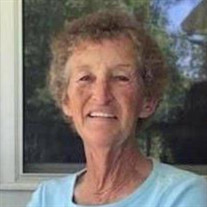 Maye Kirk Allen, 81, of Bolivar, passed away Saturday, October 16, 2021 in Selmer, TN. She was born Tuesday, August 20, 1940, in Hardeman County, daughter of the late Luther Griffin Alexander, Sr. and Lucy Iona Young Alexander and lived all of her life here. She worked at Lucerne for almost 20 years until it closed in the early 1990's and had worked at Kilgore prior to that. Mrs. Allen enjoyed her retirement and spent her time fishing, gardening with her flowers, mowing the yard and cooking for her family, whom she dearly loved. She was a member of Ebenezer Baptist Church. Survivors include her husband, whom she married in April of 1991, Tim Allen of Bolivar; three daughters, Paula Heese (Bruce) of Plano, TX, Teresa Howell (Donnie) of Bolivar and Debra Pattat (Louis) of Toone; a son, Bobby Kirk (Cindy) of Selmer; a sister, Nancy Cobb (Tom) of Bolivar; 9 grandchildren; 8 great grandchildren and 1 great great grandchild; stepsons, Steve Allen (Sherry) of Whiteville, Ronnie Allen (Annette) of Brownsville, Tim Allen, Jr. (Sharolett) of Brownsville and Monroe Allen (Kristin) of North Richland Hills, TX; 7 step grandchildren; 10 step great grandchildren and 2 step great great grandchildren. In addition to her parents, she was preceded in death by her first husband, Marvin Kirk in 1989; a sister, Lucy Faye Munn and a brother, Luther "Luke" Alexander, Jr. Memorial contributions in her name may be sent to the Oasis Medical Center in Corinth, MS or Birth Choice in Jackson, TN.

The family of Maye Kirk Allen created this Life Tributes page to make it easy to share your memories.

Send flowers to the Allen family.