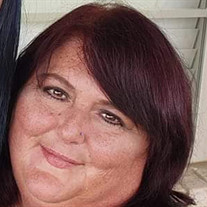 On January 17, 1968 at St. Joseph's Hospital in Memphis, TN a daughter was born to Jerry and Mattie (Foster) Kirk, they named her Melissa Rena'. Rena' entered into eternal peace on Thursday, April 15, 2021 in Omaha, Nebraska. Although she was taken so soon, her memory will forever live on in those whose lives she touched. Rena's early years were spent in Memphis. She attended Harding Academy and graduated with the Class of 1986. On July 12, 1987 she was united in marriage to Brian H. Carnagey. The couple resided in Memphis, TN, Ramer, TN, Selmer,TN, Essex, IA and currently were living in Henderson, IA. She worked as a Pharmacy Technician for several years as well as a CAEC Call Representative for the Veterans Administration until the time of her passing. Her hobbies included journaling, watching and reading murder mysteries and playing with her grandchildren. Family was the heart of their home. She had a larger than life personality and was considered by many to be a social butterfly. She tried her best to be optimistic in all circumstances. She was honest, hard working, empathic and always supportive. There is no doubt that she will be deeply missed. She was welcomed into eternal peace by her grandparents Jesse Foster, Thelma Foster, Leonard Kirk and Opal Kirk and father-in-law Rodney Carnagey. Those left to cherish her memory include her husband Brian of Henderson, Iowa; parents Jerry and Mattie Kirk of Oakland, TN; daughter Brittney Monk and husband Chris of Oakland, TN and Kayla Carnagey of Omaha, NE; grandchildren Madison Carnagey and Emery Smith of Omaha, NE; other relatives and many friends.

On January 17, 1968 at St. Joseph's Hospital in Memphis, TN a daughter was born to Jerry and Mattie (Foster) Kirk, they named her Melissa Rena'. Rena' entered into eternal peace on Thursday, April 15, 2021 in Omaha, Nebraska. Although she... View Obituary & Service Information

The family of Melissa Carnagey created this Life Tributes page to make it easy to share your memories.

Send flowers to the Carnagey family.