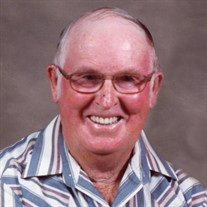 "Paw" Melvin Clinton Benson departed this life on Wednesday, September 23, 2020, at the age of 85 years, 9 months, and 5 days. He was born in Hardin County, Tennessee on December 18, 1934, the son of the late Arch D. and Lue Austin Benson. On... View Obituary & Service Information

The family of Melvin Clinton "Paw" Benson created this Life Tributes page to make it easy to share your memories.

Send flowers to the Benson family.