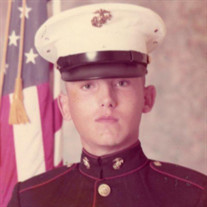 Michael David Hennen departed this life on Wednesday, February 23, 2022, at the age of 66 years and 8 days. He was born in Butte, Montana, on February 15, 1956, the son of the late John Michael Hennen and Dorothy King Jacques. On June 8, 1998, he was united in marriage to Tammy Thacker, who survives. Michael served his country honorably in the United States Marine Corp. He retired from Shiloh National Military Park and had formerly worked for Bonanza in Savannah, Tennessee. He was a people person and loved to minister to them. In addition to his wife, Tammy Hennen of Savannah, Tennessee, Michael is survived by his son, John Hennen of Savannah, Tennessee; step daughter, Jessica Boyles and her husband James of Savannah, Tennessee; granddaughter, Sophie Logan; sister, Regina Miller and her husband Ed of Gulf Port, Mississippi; and brother, Dan "Cowboy" Aaron of Adamsville, Tennessee. Along with his parents, Michael was preceded in death by a brother, Luther Aaron and a sister, Dessire Hennen.

The family of Michael David Hennen created this Life Tributes page to make it easy to share your memories.

Send flowers to the Hennen family.