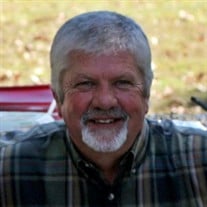 The public is invited to attend memorial services for Mike Bodiford at 10 am, Saturday, October 9, 2021 at The Clays of Lone Oak Farms, 8875 Sain Road, Middleton, TN 38052. Michael "Mike" Reid Bodiford was born on January 25, 1954 in Ripley, Mississippi to Clice and Beverly Bodiford of Middleton, Tennessee. Mike passed away on January 23, 2021 at the age of 66. Mike leaves behind his wife Janice Bodiford; two sons, Michael Jace Bodiford and wife Kristin of Medon and Collin Reid Bodiford of Bolivar; his mother, Beverly Bodiford of Middleton; three sisters, Sherry Kuroda of Middleton, Cindy Hines of Mississippi and Lana Martin of Nashville; a brother Clice "Bo" Bodiford and wife Bridgette of Medina; two brother's-in-law, Mike McKinnie and wife Lori and Lynn McKinnie and wife Penny; three grandchildren, William Jace, Trey Michael and Olivia Joe Bodiford; and numerous nieces and nephews, Jesse and Whitney Bass, Savannah Watkins, Brian Lee and Brett Martin, Derrick Kuroda, Lauren Drewery, Tyler, Dillon and Carson Bodiford, Laura McKinnie, Duncan McKinnie and wife Anna, Kaleb McKinnie, Clint McKinnie and wife Erin and Steve McKinnie. He was preceded in death by his father Clice Bodiford. Mike was a Hardeman County native-he resided in Bolivar much of his adulthood but spent his childhood as the first-born of five siblings in Middleton and went on to graduate from there alongside great friends. After graduation, Mike attended Jackson State Community College. In 1974, he married the love of his life and best friend Janice McKinnie Bodiford. In 1980, they welcomed their first-born son, Michael "Jace" Bodiford and in 1985, Collin Reid Bodiford was born. Mike was a great father to their boys affording them an idyllic childhood and passing on his love of all things outdoors to Jace, and his love for sports to Collin. Mike was a proud father and that fondness was amplified with the arrival of his grandchildren later in life. He enjoyed watching his grandchildren grow and was very active in their lives. Mike began his career as a banker at Hardeman County Savings Bank. From there, he made great strides in advancing his career with his outstanding personality, genuine demeanor, and pure talent. By the end of his career, he earned the honor of being named Vice President of the Bank of Fayette County. Additionally, his high achievements include being the second highest producer in rural market lending, a member of the Board of Directors, and on the Loan Committee. Colleagues of Mike's are quoted describing him as "a true community banker and "a mentor to everyone." Mike acquired a tremendous following throughout his career befriending and doing business with people from all walks of life. Many of his clients turned into lifelong friendships that he truly cherished. When Mike wasn't working, he spent much of his time outdoors. His love of hunting was generational, passed down from his father Clice. He enjoyed all kinds of sportsmanship but especially loved bird hunting, just as his father before him. He spent a lot of time at his cabin on the Hatchie River that he enjoyed with his whole family, entertaining and taking advantage of the wildlife and the great outdoors. Mike was a humanitarian and a community leader, but most importantly, he was an incredible husband, father, brother, and friend. The family will have a private graveside service. "We want to see each and every one of Mike's dear friends but unfortunately this horrible virus that took his life and almost took his brother's life will not allow us to grieve in the manner that we want to. We are planning to have a memorial in the future for everyone to come together and celebrate his life and the many lives that he touched. The memorial will be held at his cabin on the Hatchie River, his favorite place to be." The family would like to express their deepest gratitude to "special angels" Whitney Bass and Savannah Watkins, who were Janice's lifeline to Mike when she couldn't visit him in the hospital. In lieu of flowers, the family requests that donations can be made to the Tyler Bomar Scholarship Fund at CB&S Bank, Tyler Bomar Scholarship Fund, 724 W. Market Street, Bolivar, TN 38008.

The public is invited to attend memorial services for Mike Bodiford at 10 am, Saturday, October 9, 2021 at The Clays of Lone Oak Farms, 8875 Sain Road, Middleton, TN 38052. Michael "Mike" Reid Bodiford was born on January 25, 1954 in Ripley,... View Obituary & Service Information

The family of Michael Reid Bodiford created this Life Tributes page to make it easy to share your memories.

The public is invited to attend memorial services for Mike Bodiford...

Send flowers to the Bodiford family.