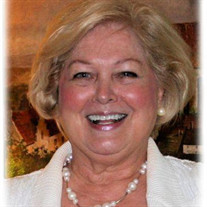 Mickey Curtis Barker passed away in Jackson, Tennessee on Monday, March 8, 2021 at Jackson-Madison County General Hospital from complications of Alzheimer’s Disease. She was born in Memphis, Tennessee on February 15, 1943, the daughter of Holland and Ruth England Rice. Mickey worked for the United States Postal Service for 25 years. She served as Postmaster in Atwood and Shiloh. She was an active member of the Methodist church for her whole life including Aldersgate United Methodist Church in Memphis, First United Methodist Church in Milan, and First United Methodist Church in Savannah, Tennessee. Mickey enjoyed decorating her home for every holiday. She loved entertaining and each year for many years she hosted a “Christmas Coffee” for her friends and neighbors to begin celebrating the season. In addition to her parents, Mickey was preceded in death by her husband of 31 years, Jimmy Curtis, her son, Joe Curtis, and her second husband of 7 years, Reverend Jack Barker. Mickey is survived by her daughter, Connie Curtis Hockaday (Eddie), her son, Jim Curtis, and her grandchildren who lovingly called her “Nana”, Edward Hockaday III (Kara) and Tori Hockaday. She is also survived by her sisters, Anita Fletcher (Hayes) and Linda Mischke (Walter) and many beloved cousins, nieces and nephews. A private family graveside service will be held at White Sulphur Cemetery in Pickwick Dam, Tennessee on Wednesday, March 10th with Reverend Walter Mischke officiating. The family requests that memorials be made to the Milan Mustard Seed, 2027 S 2nd Street, Milan, Tennessee 38358 or First United Methodist Church, 270 Main Street, Savannah, Tennessee 38372.

Mickey Curtis Barker passed away in Jackson, Tennessee on Monday, March 8, 2021 at Jackson-Madison County General Hospital from complications of Alzheimer&#8217;s Disease. She was born in Memphis, Tennessee on February 15, 1943, the daughter... View Obituary & Service Information

The family of Mickey Curtis Barker created this Life Tributes page to make it easy to share your memories.

Mickey Curtis Barker passed away in Jackson, Tennessee on Monday,...

Send flowers to the Barker family.