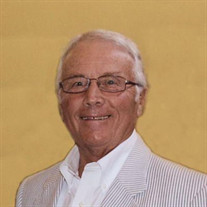 Michael Wright Haithcoat passed away surrounded by family on Saturday, August 22, 2020 after a battle with cancer. Mike was born on December 13, 1946 in Columbia, Tennessee. His parents, who preceded him in death, were J.W. and Luna Haithcoat. Mike was the only child of J.W. and Luna and loved to play baseball throughout his youth. Mike graduated from Columbia Central High School as a part of the Class of 1964 where he was a part of the Lions football team. He continued his studies after high school at the University of Tennessee, Knoxville, where he served as Recording Secretary in the Kappa Tau chapter of the fraternity of Phi Gamma Delta. He was a member of the Advanced ROTC and after graduation in 1969 was commissioned as a second lieutenant in the U.S. Army Signal Corps. Mike married Janice (Arnold) of Obion in 1970 and the couple began a life together as Mike joined active duty in Ludwigsburg, Germany (near Stuttgart). That initial adventure together continued for the next 50 years as Mike and Janice celebrated that milestone anniversary this May. After returning to the U.S., Mike entered the University of Tennessee College of Pharmacy in Memphis, Tennessee. Mike graduated in 1976 and he and Janice moved their family to Henderson, Tennessee to begin yet another adventure. Mike worked at the City Drug Store, which he would later own, until his retirement in 2016. He loved being a pharmacist and was an active member of the Henderson community. Mike was a member of the Church of Christ, but attended First Baptist Church so that his family could attend church as a family unit. Mike is survived by his wife, Janice, sons Jeffrey (Rachel) and Bradley, daughter Rebecca, grandsons Miles Jay and Graham Michael; sister-in-law, Pat Dickerson, nieces Nan (Eric) Beaty, Millie (Cory) Minton, cousins Doris Bassham of Columbia, Carolyn Banas of Florida, John, Pete, and Wanda Wright of Columbia, Evelyn McMillan of Memphis, Roy Wright and Lisa Piper both of Franklin; half-sister Donna Woods of Ringgold, Georgia and half-brother James W. Haithcoat, Jr. of Lompoc, California. The family plans to have a celebration of Mike’s life sometime in the future and asks that in lieu of flowers, any memorials be sent to the First Baptist Church of Henderson Building Fund. Shackelford Funeral Directors of Henderson 304 Crook Aveune Henderson, TN 38340

Michael Wright Haithcoat passed away surrounded by family on Saturday, August 22, 2020 after a battle with cancer. Mike was born on December 13, 1946 in Columbia, Tennessee. His parents, who preceded him in death, were J.W. and Luna Haithcoat.... View Obituary & Service Information

The family of Mike Haithcoat - Henderson created this Life Tributes page to make it easy to share your memories.

Michael Wright Haithcoat passed away surrounded by family on...

Send flowers to the Haithcoat family.