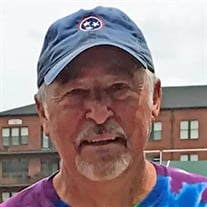 **The family of Mike Madden would like to invite everyone to attend a "Celebration of Life" in his honor and memory. This was his wish, to "Celebrate" his life and not mourn his passing. It will take place Saturday, April 9, 2022, from 12 pm until 2 pm at the Hardeman County Country Club, 215 Country Club Lane, Bolivar, TN.** Mr. Madden departed this life on Monday, August 16, 2021 at Jackson-Madison County General Hospital. He was born in Corinth, MS on April 10, 1948 to the late Rev. Frank Irwin Madden and Joann Johnson Madden. Mike, his brother, Marty and their parents spent his early years in the Corinth area, but due to his father's work as a Methodist minister, the family lived in several different locales. He graduated from Riverside High School in Parsons, TN in 1966 and served his country in the US Marine Corps during Vietnam. Upon returning home, he enrolled in Lambuth University in Jackson graduating in 1975. Mike received his Master's Degree in Education from the University of Memphis in 1991. Mr. Madden was a retired teacher spending most of his career in Hardeman County, first at Whiteville Elementary, and then serving as assistant principal at both Middleton and Bolivar Central High Schools. He finished his tenure as history and social studies teacher at BCHS. An avid sports fan, he especially loved playing golf and closely following the St. Louis Cardinals. He also spent many hours coaching BCHS girls' softball, girls' basketball and football. He refereed many area basketball games and umpired softball games, as well. Mike was a former Senior Club Champion Golfer at the Hardeman County Golf & Country Club. Active in his community as a Hardeman County Commissioner, he was a founder and the first president of Hardeman Adoptable Animals. His vision and influence were instrumental in the development and construction of the group's new facility. He leaves his wife of 40 years, Susan Baker Madden of Bolivar; his son, Corey Allen (Megan) Madden of Bolivar; his grandson, Bryce Allen Madden of Bolivar; and his brother, Marty Irwin Madden of Dyersburg. Memorials may be sent to: 1 - Hardeman Adoptable Animals, PO Box 513, Bolivar, TN 38008 [https://www.hardemanadoptableanimals.org/donate/]; 2 - Tyler Bomar Scholarship Fund, Bolivar, TN; or 3 - Union Cemetery Fund, Bolivar, TN.

**The family of Mike Madden would like to invite everyone to attend a "Celebration of Life" in his honor and memory. This was his wish, to "Celebrate" his life and not mourn his passing. It will take place Saturday, April 9, 2022, from 12... View Obituary & Service Information

The family of Mike Madden created this Life Tributes page to make it easy to share your memories.

**The family of Mike Madden would like to invite everyone to...

Send flowers to the Madden family.