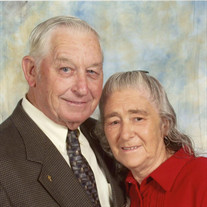 Minnie Sue Clay Franks was born in Hardin County, Tennessee on October 15, 1937 the daughter of the late Herbert Nolan and Rosa Lee Downing Clay. On February 26, 1955 she was united in marriage to Hollis Odell Franks, who preceded his wife... View Obituary & Service Information

The family of Minnie Sue Franks created this Life Tributes page to make it easy to share your memories.

was born in Hardin County, Tennessee...