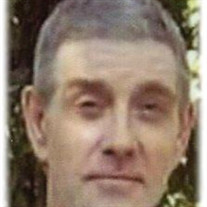 Mr. Monty Lee Cobb was born January 2, 1963 in Louisville, KY the son of the late Donald Ray and Martha Ann Wooden Cobb. Mr. Cobb worked as a logger.He departed this life on December 21, 2020 in Waynesboro, Tennessee making his stay in this... View Obituary & Service Information

The family of Monty Lee Cobb created this Life Tributes page to make it easy to share your memories.

Send flowers to the Cobb family.