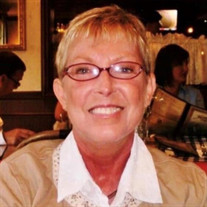 Myra Hazard 1950-2020 Most obituaries tend to idolize the dead. As soon as someone passes, they seem to instantaneously take on the characteristics of a storybook hero, becoming more myth than fact. But Myra Hazard, who is the subject of this... View Obituary & Service Information

The family of Myra Tidwell Hazard of Adamsville, TN created this Life Tributes page to make it easy to share your memories.

Send flowers to the Hazard family.