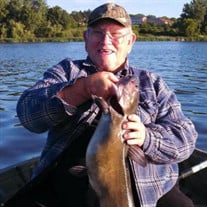 Nathan Joe Owens, Sr. was born January 27, 1934 in Tallahatchie County, MS the son of the late Frederick James, Sr. and Rosalee Nobles Owens. He was united in marriage to Peggie Smith on July 5, 1957. Mrs. Owens preceded him in death on February 19, 1999, following 41 years of marriage. Mr. Owens was employed as a core finisher for South Beloit Foundry in South Beloit, IL for 23 years. He worked an additional 15 years in maintenance for the Northgate Apartments before retiring. Hunting, fishing, and family were his priorities; he almost never missed an opening day of hunting season, with the exception of when his wife had a kidney stone attack-he always said she did it on purpose to interfere with his hunt! Nathan was always there for others; he never asked when or why, and never made anyone feel like he was doing them a favor. His life could be summed up in one word-loyalty. Mr. Owens was Southern Baptist in faith and attended the Selmer Second Baptist Church when he was able. Mr. Owens departed this life on October 28, 2020 in Selmer, Tennessee at the age of 86 Years, 9 Months, 1 Day. He is survived by a son, James M. Owens and wife Dawn of Selmer, TN; a daughter, Corinne Preston and husband Ken of Mesa, AZ; five grandchildren: Ryan McQueen and wife Robyn, Michael McQueen and wife Kati, Peach Grim, Kimberly Blackwell and husband Alex, Heather Johnson and husband Tony; seven great-grandchildren: Natalynn McQueen, Colin McQueen, Kailyn Johnson, Logan Johnson, Maya McQueen, Cameron McQueen, and Tyler Blackwell; a sister-in-law, Margaret Owens of Charleston, MS; a special friend, Bill Curry of Beloit, WI; and many extended family and friends. In addition to his wife and parents, Mr. Owens was preceded in death by a daughter, Faith Rosanne Grim; a son, Nathan Joe Owens, Jr.; five sisters: Lorena Bonner, Ethel Beaird, Cassie Youngblood, Mary Jane Wainwright, and Faith Owens; and four brothers: Leslie Owens, Roscoe Owens, Newton Owens, and Dane Owens.

Nathan Joe Owens, Sr. was born January 27, 1934 in Tallahatchie County, MS the son of the late Frederick James, Sr. and Rosalee Nobles Owens. He was united in marriage to Peggie Smith on July 5, 1957. Mrs. Owens preceded him in death on February... View Obituary & Service Information

The family of Nathan Joe Owens, Sr. of Selmer, TN created this Life Tributes page to make it easy to share your memories.

Send flowers to the Owens family.