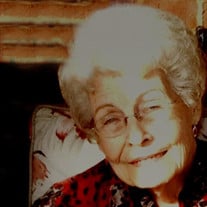 Nora Marie Reddell Mills was born on May 3, 1929 in Stantonville, TN to the late Anderson Reddell and Josie Flatt Reddell, the fourth of twelve children. Marie attended Stantonville School. She was married to Cletis Lee Mills on January 4, 1947. They made their home in Michie and was a member of Michie First Baptist Church. She worked at ITT in Corinth, MS for 25 years. After the death of her husband of 48 years in 1995, Marie moved to Adamsville, TN to reside in a senior citizens apartment complex. She joined the First Baptist Church of Adamsville. She was a devoted member and prayer warrior. When Marie's health began to decline and she had her first stroke, which left her paralyzed on the left side, she moved to Cornerstone Health and Rehab in Corinth, MS. With Covid and restrictions placed for family visits, Marie grieved for her family and friends. She began declining and God called her to her heavenly home on the afternoon of Sunday, August 30, 2020. There to welcome her home were her parents; husband; son, Jody Mills, sisters: Alma, Mildred, Thelma, Elva, Helen, Nellie; brothers, Jerry and Larry; and a sister-in-law, Joanne Reddell. Those left to cherish her memory are a daughter, Annette St Clair (Ben) of Ashland, MS; son, Lex Mills (Ramona) of Guys, TN; grandchildren: Jim Gilton (Stephanie) of Germantown, TN, David Gilton of Memphis, TN, Heather Rast (Erik) of Burnsville, MS; great grandchildren: Cody and Hailey Gilton, Ethan and Alydia Rast; Brothers: John Reddell of Murfreesboro, TN, Kenneth Reddell of Corinth, MS; special friend/roommate, Charlene Floyd. A graveside service will be held at 1 pm on Tuesday, September 1, 2020 at Pebble Hill Cemetery, with Bro Rayborn Richardson officiating. In lieu of flowers, family request memorials be made to Pebble Hill Cemetery Fund c/o Nathan Moore 5535 Michie Pebble Hill Rd. Michie, TN 38357 or Kare-in-Home Hospice of Corinth, MS or charity of choice. Special appreciation to her hospice nurse Keith Miller RN and Marie's extended family and staff of Cornerstone Health and Rehab.

Nora Marie Reddell Mills was born on May 3, 1929 in Stantonville, TN to the late Anderson Reddell and Josie Flatt Reddell, the fourth of twelve children. Marie attended Stantonville School. She was married to Cletis Lee Mills on January 4,... View Obituary & Service Information

The family of Nora Marie Mills of Corinth, MS created this Life Tributes page to make it easy to share your memories.

Send flowers to the Mills family.