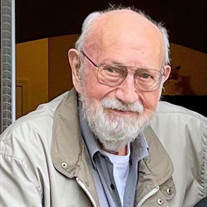 Mr. Orval Kirk, age 90, of Murfreesboro, TN passed away Tuesday, October 26, 2021. He was born in Pocahontas, TN to the late Richard S. and Lula Pearl Tackett Kirk. Mr. Kirk proudly served in the Tennessee National Guard. He and his wife, Betty, leased and managed motels in Pigeon Forge, TN for many years. He enjoyed travelling when he could and woodworking. Mr. Kirk is survived by his wife of 68 years, Betty Jean Kirk; sons, Ricky Kirk and his wife Debbie of Danville, KY and Richard Kirk and his wife Phillis of Smyrna, TN; grandchildren, Seth Kirk and his wife Rachel, Derek Kirk and his wife Kaitlyn, Rachael Odom and her husband Carson, and Rebecca Kirk and her husband Tyler; and five great-grandchildren, Wynn, Ada Jane, Violet, Ivy May, and John David. In addition to his parents, he was preceded in death by his siblings, William Hestor, Ralph, Milford, Armenta, Lavada, and Oleta.

The family of Orval Kirk of Murfreesboro, TN created this Life Tributes page to make it easy to share your memories.

Send flowers to the Kirk family.