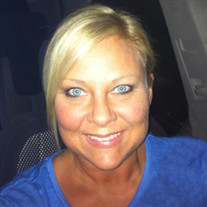 PAIGE ARGUS Bethel Springs, TN: Paige Emily Henson Argus age 48 passed away February 6, 2021 at Vanderbilt Hospital. She was born September 11, 1972 in Jackson, the daughter of Paul Emerson and Dianne Kirk Henson. She grew up in Bethel Springs and attended schools in Chester County, graduating from Chester County High School in 1990. She received an AA degree from Jackson State Community College, a B.S. in Human Ecology from Lambeth University, and later earned her BSN Degree from Union University in 2007. She worked as a nurse at Magnolia Hospital in Corinth, MS, the Henderson County Health Department and had been working at Jackson Madison County General Hospital for the past six years. She married David Argus, III on May 4, 2015. Even in her passing she was a blessing to others through organ donation. She was a member of the Woodville Baptist Church. A beloved daughter, wife, and mother, she especially loved spending time with her grandchildren. Paige is survived by her husband, David Argus, III of Bethel Springs, a son, Chad Carroll Payne, Jr. and a daughter, Macee Alexandra Murley (Jonathan); a stepson, David Argus IV all of Bethel Springs and her father and mother, Emerson and Dianne Kirk Henson of Bethel Springs and two grandchildren, Maverick Murley and Violet Murley. She was preceded in death by her grandparents, Paul and Bufie ‘Sister’ Henson and Samuel and Willie Jo Kirk and a step grandfather, Thurman Moore. Funeral services will be 2:00 PM Saturday, at Shackelford Funeral Directors – Crook Avenue with Danny Hopper and Kim Benson officiating. Burial will follow in Woodville Cemetery. The family will receive friends at Crook Avenue 10:00 AM until 2:00 PM service time on Saturday. In lieu of flowers donations may be made to St. Jude’s Hospital. The family requests that facial coverings be worn and mindfulness of social distancing be practiced. Shackelford Funeral Directors of Henderson 731-989-2421

The family of Paige Henson Argus - Bethel Springs created this Life Tributes page to make it easy to share your memories.

Send flowers to the Argus family.