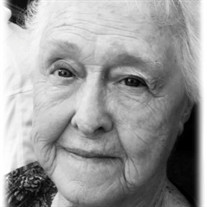 Mrs. Patsy Riley Baer departed this life on Thursday, August 6, 2020 at her residence in Waynesboro, Tennessee at the age of 87 Years, 9 Months, 19 Days. She was born October 18, 1932 in Waynesboro, TN, the daughter of the late Elmer and Bertha... View Obituary & Service Information

The family of Patsy Baer, Waynesboro, TN created this Life Tributes page to make it easy to share your memories.

Send flowers to the Baer family.