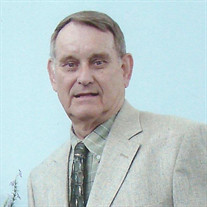 Paul Dean Briley departed this life on Sunday, August 2, 2020, at the age of 82 years, 2 months, and 26 days. He was born in Savannah, Tennessee on May 7, 1938, the son of the late Grover "Bake" and Nellie Jones Briley. On April 17, 1965, he was united in marriage to Ila Ann Webb, who preceded him in death on June 13, 2019. Paul enjoyed gardening, especially fruits and vegetables, liked his Tennessee sports, and loved to travel with his wife. He loved the Lord and was always trying to do God's work. Paul preached for over 45 years and was a member of Pickwick Church of Christ. He retired from B&R Lumber Company where he was a bookkeeper and a salesman. Paul is survived by his children, Keith Briley of Horn Lake, Mississippi, Kevin Briley and his wife Susan of Jacksonville, Alabama, and Paula Jennings and her husband Raymond of Bartlett, Tennessee; grandchildren, Tessa Briley, Zachary Briley, Marrisa Briley, Abby Jennings, and Allie Jennings; brothers, Billy Briley and Sammy Briley, both of Savannah, Tennessee; and sisters, Portia Reyna of Salinas, California, Elaine Colyn of Seattle, Washington, Betty Chessor of Pocahontas, Tennessee, and Angela DeShazier of Savannah, Tennessee. In addition to his parents and his wife, Paul was preceded in death by his infant brother, Earl Gean Briley and his sister, Evelyn Jo Weathers. Memorial donations may be made to a charity of your choice in memory of Paul Dean Briley. The family requests that all visitors must wear a mask for visitation and service, thank you.

The family of Paul Dean Briley created this Life Tributes page to make it easy to share your memories.