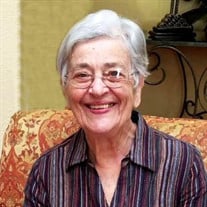 Peggy Ann Gouge Ingraham Peggy Gouge Ingraham passed away peacefully on 2/7/21. She was born April 17, 1937 in Unicoi, Tennessee to Bertha Jones Gouge and W. W. Gouge. She grew up surrounded by lots of extended family about which many hilarious tales have been told. Peggy graduated Salutatorian from Unicoi High School in 1955 and moved to Memphis to attend Dental Hygiene school at the University of Tennessee. It was here that she met and married her beloved husband of 56 years, Dr. Robert Quinn Ingraham. They made their home together in Jackson, Tn where Peggy was admitted to and graduated with honors from Lambuth University with a BS degree in microbiology. She worked as a microbiologist with the Madison County Health Department until she had her children. Peggy was a brilliant and conscientious microbiologist, but she excelled as a mom and wife. She had lots of hobbies including playing the piano, singing, reading mystery books, needlework, cooking, and crossword puzzles. She wrote news-filled letters everyday to her kids while they were in college and medical school so that their mailboxes would never be empty. After her kids left for college, Peggy returned to work in the State laboratory for another 15 years before she retired. She attended Skyline Drive Church of Christ in Jackson, Tn and had so many sweet, lifelong friends from there. She is preceded in death by her parents, 2 brothers, Ben Gouge (Janice) and Blake Gouge (Barbara) and her husband, Bob Ingraham. She leaves behind 2 children-Dr. Carol Ingraham Lynn of Collierville, TN and Dr. Robert Quinn Ingraham, Jr (Tracie) of Oxford, Mississippi and 4 grandchildren-Brooks Harrison Lynn and Leslie Caroline Lynn of Collierville, Tn and Robert Quinn Ingraham, III and Caroline Ellen Ingraham of Oxford, MS. She also leaves behind her devoted sister in law, Jane Ryals of Jonesboro, Arkansas. Peggy was a beautiful, private, and humble lady. She will be honored at a small graveside service at the Henderson City Cemetery. In lieu of flowers please consider a donation to the Alzheimer’s association- Alz.org or to: Baptist Reynolds Hospice House 1520 W Poplar Ave, Collierville, TN 38017

Peggy Ann Gouge Ingraham Peggy Gouge Ingraham passed away peacefully on 2/7/21. She was born April 17, 1937 in Unicoi, Tennessee to Bertha Jones Gouge and W. W. Gouge. She grew up surrounded by lots of extended family about which many hilarious... View Obituary & Service Information

The family of Peggy Ingraham created this Life Tributes page to make it easy to share your memories.

Send flowers to the Ingraham family.