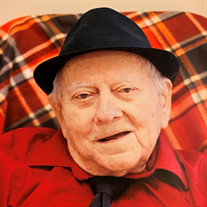 R.H. DeShazier departed this life on Monday, November 23, 2020, at the age of 93 years, 6 months, and 11 days. He was born in May 12, 1927, the son of the late Will and Mattie Lucille Isley DeShazier. On August 30, 1952, he was united in marriage to Jean Loyce Barrett, who preceded him in death on September 8, 2008. Mr. DeShazier was self-employed as a logger. He loved to hunt and do small engine repair. He is survived by his son, Walker DeShazier and his wife Sandra of Savannah, Tennessee; grandchildren, Richard DeShazier, Peyton DeShazier, and Shelby DeShazier; step grandchildren, Jerry DeShazier and Melissa DeShazier; several great grandchildren and great-great grandchildren. In addition to his parents and his wife, Mr. DeShazier was preceded in death by his sister, Lizzie Smith, Rose Hollins, Stella Hunt, and Lena Hutton; and brothers, Bill DeShazier, Irvin DeShazier, and Vernon DeShazier.

The family of R. H. DeShazier created this Life Tributes page to make it easy to share your memories.

Send flowers to the DeShazier family.