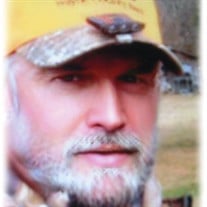 Randel Lance Webb of Waynesboro, TN was born May 13, 1959 in Florence, AL, the son of the late William Ralph Webb and Jimmie Nelle Pulley Brown. He was united in marriage to the former Peggy Louise Skipworth on February 27, 1992. Mr. Webb was a working lineman with Tennessee Valley Electric Cooperative and was a member of IBEW #558. He was a member of the Green River Baptist Church in Waynesboro, Tennessee and departed this life on Tuesday, January 12, 2021 at Select Speciality Hospital in Nashville, Tennessee at the age of 61 Years, 7 Months, 30 Days. He is survived by his wife, Peggy Louise Skipworth Webb of Waynesboro, TN; sons, Ryan Webb and wife, Shaina of Collinwood, TN and Jeremy Skipworth and wife, Leah of Waynesboro, TN; a daughter, Amber Griggs and husband, Byron of Waynesboro, TN; grandchildren,Kelli and Andrew Kelly, Katelyn Griggs, Jake and Ty Skipworth and Bryce Webb; great-grandson, Krew Kelly; a very special aunt, Neva Brown; a very special cousin, Kathy Overton and other aunts, uncles, cousins, nieces, nephews, brothers-in-law and sisters-in-law. In addition to his parents, Mr. Webb was preceded in death by his step-father, Jerry G. Brown. Services will be held on Saturday, January 16, 2021 at 3:00 PM at Shackelford Funeral Directors chapel, Waynesboro, Tennessee, with Chad Balentine officiating. Burial will follow in Mt. Hebron Cemetery, Collinwood, Tennessee with Shackelford Funeral Directors, Wayne County assisting the family. Visitation will be Friday, January 15, 2021 from 4:30 pm to 7 pm and Saturday, January 16, 2021 from 1 pm to service time at the funeral home. Pallbearers will be Eddie Berry, Ronnie Mathis, Harold McWilliams, Danny Moore, Wayne Gipson and Jody Roberson with Richard Gray and all other TVEC employees serving as honorary pallbearers. The family requests that in lieu of flowers, memorial donations may be given to a charity of your choice. If you attend the visitation or services, you are ask to wear mask and practice physical distancing.

Randel Lance Webb of Waynesboro, TN was born May 13, 1959 in Florence, AL, the son of the late William Ralph Webb and Jimmie Nelle Pulley Brown. He was united in marriage to the former Peggy Louise Skipworth on February 27, 1992. Mr. Webb was... View Obituary & Service Information

The family of Randel Lance Webb, Waynesboro, TN created this Life Tributes page to make it easy to share your memories.

Send flowers to the Webb family.