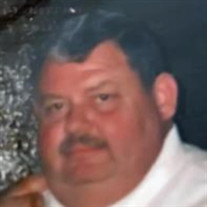 Ray Smith, 70, of Grand Junction, passed from this life Friday, December 11, 2020 at his home. The husband of Cheryl D. Smith, who survives, he worked for the Hardeman County Sheriff's Department and the Grand Junction Police Department. He also was the owner at C&R Antiques in Grand Junction. He was born Friday, February 3, 1950 in Tupelo, MS, son of the late Alton Raymond Smith and Martha Lucille Goddard Smith, attending high school in Savannah. He had lived in Clifton, TN and St. Louis and Memphis prior to moving to Grand Junction. He enjoyed watching football, especially Alabama football, riding in his golf cart, talking about guns, watching old westerns, visiting his neighbors and making jokes. He was known to give out nicknames quite frequently and talk a lot about coins, but was best known for his immense love for his family. He was a Christian man and his family describes him as 'one of a kind who will be missed by all who knew him.' Survivors include his wife, Cheryl D. Smith, whom he married on September 3, 1985; a nephew, Scott Glidewell of Kossuth,MS and two nieces, Missy Kruse of Florida and Cassandra Perley of St. Louis, MO. In addition to his parents, he was preceded in death by a stepson, Wayne McAfee; a brother and three sisters. Memorial contributions in his name may be sent to First Baptist Church of Grand Junction or the American Cancer Society (www.cancer.org/donate). While visiting or attending services for Mr. Smith, please consider the following guidelines: * Maintain 6 feet between yourself and the next closest person; * Refrain from hugs and handshakes; * When you sneeze or cough, use your elbow to cover your nose and mouth; * Wash your hands often; * Avoid touching your face; and * Minimize time spent in places where people gather. Thank you for your consideration.

Ray Smith, 70, of Grand Junction, passed from this life Friday, December 11, 2020 at his home. The husband of Cheryl D. Smith, who survives, he worked for the Hardeman County Sheriff's Department and the Grand Junction Police Department.... View Obituary & Service Information

The family of Ray Smith created this Life Tributes page to make it easy to share your memories.

Ray Smith, 70, of Grand Junction, passed from this life Friday,...