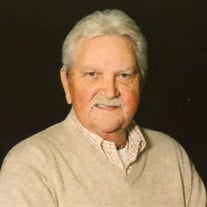 Rex Hinton Adkisson was born in Savannah, Tennessee, on June 6, 1938, the son of the late Robert William and Aleen Hinton Adkisson. He was united in marriage to Geraldine Kennedy on October 15, 1961. She preceded him in death on January 28, 2018. Rex served his country honorably in the National Guard from 1956 until 1957 when he transferred to the US Navy. He served in the Navy from 1957 until 1961 and was a 2nd Class Machinist's Mate. During his service in the Navy, he was aboard the air craft carrier USS Lake Champlain May 5, 1961, taking part in the recovery mission for the Freedom 7 capsule carrying Alan Shepard, the first American in space. Rex went to work for PCA in Counce, Tennessee and retired from the company after 37 years. Not one to sit around, he went to work for Community South Bank now CB&S Bank, as a courier for 20 years; he loved and was loved by his special work family there. He was a member of Hopewell Baptist Church for 57 years, where he served as usher, deacon, and trustee. Rex was an avid supporter of UT and Hardin County sports, especially his children and grandchildren in football, baseball, basketball, tennis, and cross-country. In 2019 he was the recipient of the Big Maroon Club Award. He was a fixture at daily football practices and could be spotted in his white truck on South Street. Rex had a passion for genealogy and local history, Indian relics, and taking care of and watching birds. Rex Hinton Adkisson departed this life on Tuesday, January 26, 2021, at the age of 82 years, 7 months, and 20 days. He loved people, genuinely and was described by others as selfless and kind, always having a smile and hug to give. He is survived by his children, Jana Carroll and her husband Kirk, Dan Adkisson and his wife Latonia, and Bob Adkisson and his wife Amy, all of Savannah, Tennessee; grandchildren, McKenzie Carroll of Savannah, Tennessee, Molly Carroll of Knoxville, Tennessee, Carter Carroll and his wife Amber of Savannah, Tennessee, Kendall Adkisson and his wife Claire of Richmond Heights, Missouri, Addy Adkisson , Walker Adkisson, and Abram Adkisson, all of Savannah, Tennessee; great grandchildren, Rex Carroll and Bowe Carroll, both of Savannah, Tennessee; sisters, June Vinson of Adamsville, Tennessee and Janice Claiborne of Nashville, Tennessee; sister-in-law, Julia Adkisson of Savannah, Tennessee; and numerous nieces, nephews, and cousins that loved him deeply. In addition to his parents and wife, Rex was preceded in death by a sister, Gail Selby; a brother, Bob Adkisson; and brothers-in-law, Jeff Selby and Billy Ray Vinson. Due to Covid-19 concerns, the family of Rex Hinton Adkisson have chosen to honor him with a private family service that will be live streamed from Hopewell Baptist Church. You may watch the service at: www.gohopewell.com, starting at 1:30 p.m. Sunday, January 31, 2021. Memorial donations may be sent to Hopewell Baptist Church Building Fund, 9845 Highway 128, Savannah, TN 38372.

Rex Hinton Adkisson was born in Savannah, Tennessee, on June 6, 1938, the son of the late Robert William and Aleen Hinton Adkisson. He was united in marriage to Geraldine Kennedy on October 15, 1961. She preceded him in death on January 28,... View Obituary & Service Information

The family of Rex Hinton Adkisson created this Life Tributes page to make it easy to share your memories.

Rex Hinton Adkisson was born in Savannah, Tennessee, on June...

Send flowers to the Adkisson family.