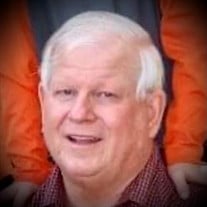 Mr. Emerson, age 79, of Saulsbury, passed away early Thursday morning at his home. Rich spend the first days of his life on the banks of the Tennessee River in Savannah. His father operated a dry goods store there but the river town was never meant to be home. Asa was shortly drafted and deployed on an LSD boat in the Pacific during World War II. Sara and Rich would move to Saulsbury and live with his grandparents, Capp and Buella Richards. Capp passed away in the family home before Rich’s first birthday. This left the new baby to be spoiled by his mother, grandmother, and great Grandmother Sarah Cox. Saulsbury would always be “home” to Rich. Life took him to many small towns and big cities. He was able to travel the world. Yet the loving community in which he was raised always captured his heart. His childhood revolved around the great outdoors. He loved to fish and hunt quail. He raised cattle, hogs, horses, and some of the best bird dogs in West Tennessee. One of his jobs was selling chickens while the rest of the family was working. He complained that everyone came to get their evening dinner while he was enjoying the Howdy Doody Show. Rich spent his teenage years climbing over fences and running through fields searching for the next big covey of quail. God’s creation grabbed ahold of Rich. He spent the remainder of his life staying outside as much as possible. He worked with a survey crew to lay the new drainage ditch for the Porter’s Creek. Rich also discovered and mapped the last remaining virgin forest in Hardeman County. The passion for the outdoors drew him to receive a Bachelor of Science in Entomology from the University of Tennessee at Knoxville. He had one employer as an adult, the State of Tennessee’s Department of Agriculture. Through 41 years he monitored and contained evasive insects in greenhouses, nursery yards, urban cities, and rural row crops. Work was never just a job. It was a way of life that he shared with everyone around him. Through the years he was recognized for outstanding achievements in such endeavors as National 4-H, Tennessee National Guard, and Tennessee Nursery and Landscape Association. Yet, Rich’s greatest accomplishment were the friendships made along the journey. His buddies from Union, co-workers with the state, his adopted family in the Hammons clan, and so many others made life more valuable. He never met a stranger and treated everyone with the same compassion and respect. The family would like to extend their gratitude to his dear friend Chris Bumpus. Chris was Rich’s right hand man in the last few years. Their relationship allowed him to keep doing what he loved for as long as possible. Rich gave that same friendship and devotion to his family. His sons and grandchildren learned the love of Christ through his model. Whether in the woods, working in garden, or enjoying one of his meals; you always had to be ready for laughter and a good time. He taught us to work hard and play hard. Norma was the great love of his life. They married January 15, 1994 in the same family home where Rich grew up. Their first place together was located in Eva, TN. From that little cross roads, they would travel across the world to see and do so much, together. Rich took great joy in sharing the big and small gifts with her every day. Robert Richards Emerson passed away in the place he called home for so many years, only a few feet away from where his grandfather died in 1942. The lasting legacy from Rich’s life is the salvation granted to him by the death and resurrection of Jesus. Rich confessed his sins before the Lord and accepted the Savior’s graceful and merciful forgiveness. Through the promise of God we have assurance that Rich has only now begun to live.

Mr. Emerson, age 79, of Saulsbury, passed away early Thursday morning at his home. Rich spend the first days of his life on the banks of the Tennessee River in Savannah. His father operated a dry goods store there but the river town was never... View Obituary & Service Information

The family of Rich Emerson created this Life Tributes page to make it easy to share your memories.

Send flowers to the Emerson family.