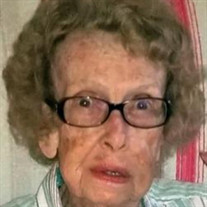 Mai Roalice Lax, age 85 of Bolivar, passed from this life on Friday morning, December 31, 2021. Mrs. Lax lived all her life in Hardeman County and was a dedicated homemaker. She enjoyed working in flowers, watching birds (especially Hummingbirds), feeding foxes and in general any kind of animals, (especially horses). She was an extremely good cook, never needing recipes. She enjoyed watching soap operas, and game shows; among her favorites were 'The Bold and the Beautiful', 'The Price is Right', 'Let's Make a Deal' and 'Wheel of Fortune'. She was preceded in death by her beloved husband, James Franklin Lax, who passed on July 31, 2013. She was a member of First Baptist Church of Bolivar, TN. Survivors include three daughters, Clara Jane and Diane Lax, and Cindy Lax all of Bolivar; two sons, Barry Clayton Lax also of Bolivar, and Chris Lax (Jarrod Summers) of Memphis;two grandchildren, Leslie and Ashley Lax; and four great-grandchildren, Melanie Ross, Nealyn Norman, Lydia Lucy, and Lennon Lax. In addition to her husband, Mrs. Lax was preceded in death by her parents Roy Leonard and Clara Hillhouse Gibson; and by a son, Jimmy Lax. Due to inclement weather, services will be held at 11:00 AM Monday, at Shackelford's Bolivar chapel. There will be no services at graveside.

The family of Roalice Gibson Lax created this Life Tributes page to make it easy to share your memories.

Mai Roalice Lax, age 85 of Bolivar, passed from this life on...