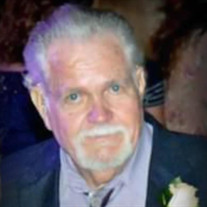 Robert G. Thearp, 77, of Bolivar, departed this life Saturday evening, December 26 at Jackson-Madison County General Hospital. The husband of Patricia Sue Young Thearp, who survives, he was retired from Harmon Automotive where he had worked for 35 years. He also was an entrepreneur and excellent cabinet maker, owning his own shop for years. He was born August 4, 1943 in Hardeman County, son of the late Floyd and Allie King Thearp, and was a life long resident of the county. He was an expert wood crafter, making instruments and pedal bicycles and was also known for his musical abilities, performing in one of the first local Hee Haw shows in Hardeman County. Mr. Thearp was a member of Shandy Baptist Church. In addition to his wife, whom he married on September 3, 1963, he is survived by three daughters, Robin Thomas of Bolivar, Amanda Kennedy (Cory) of Middleton and Gwen Faulk of Bolivar; three sisters, Geniel Ervin of Bolivar, Janette Willoughby of Toone and Bryndal Sipes of Jackson; 7 grandchildren, Robert Zacharey Doyle (Beth), Ethan Michael Faulk, Tempie Alyssa Patricia Burnette (Josh), Madalyn Maryally Carter (Evan), Kennon Glenn Kennedy, Gwyneth Ella Nicole Baker and Brylan Thearp Kennedy; 2 great grandchildren, Zacharey Kasyn Doyle and Rebekah Kynzlee Doyle; and several nieces and nephews. In addition to his parents, he was preceded in death by a sister, Parthenia McKee; two brothers, Jimmy & Eugene Thearp; a grandson, Carson Kennedy; and his pet dog, "Tootsie". Memorial contributions in his name may be sent to Shandy Baptist Church. While visiting or attending services for Mr. Thearp, please consider the following guidelines: * Maintain 6 feet between yourself and the next closest person; * Refrain from hugs and handshakes; * When you sneeze or cough, use your elbow to cover your nose and mouth; * Wash your hands often; * Avoid touching your face; and * Minimize time spent in places where people gather. Thank you for your consideration.

Robert G. Thearp, 77, of Bolivar, departed this life Saturday evening, December 26 at Jackson-Madison County General Hospital. The husband of Patricia Sue Young Thearp, who survives, he was retired from Harmon Automotive where he had worked... View Obituary & Service Information

The family of Robert G. Thearp created this Life Tributes page to make it easy to share your memories.

Send flowers to the Thearp family.