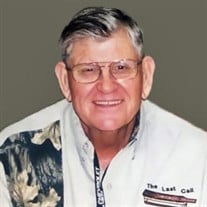 Robert W. Clifft departed this life Saturday, May 8, 2021 at Pine Meadows Health Care in Bolivar. He was born Friday, January 10, 1930 in Bolivar and lived all his life here never living more than 5 miles from where he was born. He was the fifth child born to the late Ermon Lloyd and Carrie Laverne Long Clifft. In addition to his parents, he was preceded in death by three sisters, Dorothy Crump, Frances Bomar and Peggy Pattat; and four brothers, James, Muesel, Jack and Fred Clifft. On April 1, 1951, Robert married Inez Owens when they eloped to Mississippi. Mr. Clifft served his country in the US Army from 1951-1953, stateside in special services. When serving as a county commissioner, he was instrumental in helping bring Bolivar Community Hospital to this area. Robert and his brother, Richard, were partners in the Clifft Insurance Agency in Bolivar. He worked for Ford Motor Company in Memphis and sold cars for Bolivar Motor Company in Bolivar. A faithful member of the Bolivar First Baptist Church, he had been Sunday School Director and Teacher having taught the high school boys and older adults. He was active in their jail ministry, training union and served as a Deacon. His first love was to Jesus Christ, his Lord and Savior. Robert was a gifted athlete having played both baseball and basketball in his younger years. He also enjoyed fishing and hunting, especially turkeys. As a result of his passion, Mr. Clifft became one of the foremost and well-known makers of turkey calls in the country. When making calls, he relied on his wife to help him "hear" when a call was ready to sell. He won several awards for his call making including National Championship Working Call in 2005 with his handmade call named "The Last Call". Additionally, he won first place in the NWTF turkey calling contest. Always eager to share his love of God, many times he took the opportunity to spread the Gospel through his notoriety in turkey-calling and hunting circles. He leaves his wife of 70 years, Inez Clifft of Bolivar; two brothers, Richard Clifft and his wife, Linda, and Jerry Clifft and his wife, Pat, all of Bolivar; and numerous nieces and nephews. Memorials may be sent to Bolivar First Baptist Church, 826 West Market Street, Bolivar, TN 38008.

Robert W. Clifft departed this life Saturday, May 8, 2021 at Pine Meadows Health Care in Bolivar. He was born Friday, January 10, 1930 in Bolivar and lived all his life here never living more than 5 miles from where he was born. He was the... View Obituary & Service Information

The family of Robert W. Clifft created this Life Tributes page to make it easy to share your memories.

Send flowers to the Clifft family.