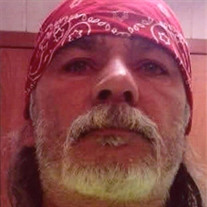 Roger Hutchins departed this life on Friday, December 25, 2020, at the age of 59 years, 1 month, and 9 days. He was born in Houston, Texas on November 16, 1961, the son of the late Charlie Dan and Mary Francis Blaylock Hutchins. On April 19,... View Obituary & Service Information

The family of Roger Hutchins created this Life Tributes page to make it easy to share your memories.

Send flowers to the Hutchins family.