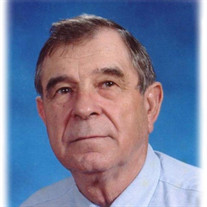 Roger T. Villines, age 85, passed away peacefully Tuesday, December 28, 2021 at Wayne Medical Center. He will be remembered as a faithful Christian, loving son, brother, husband, father, grandfather, as well as a person committed to his community. Born to the late Evadine and Robert Clay Villines on January 10, 1936, Roger grew up in Webster County, Kentucky. He became enamored with Wayne County as a young boy who, over summer vacations, visited his aunt and uncle, Jean and Newt Allen Floyd, in the Eagle Creek area of Clifton. Upon graduating from David Lipscomb College (now Lipscomb University) in Nashville, Roger and his new bride, Sandra Sullivan Villines, moved to Clifton where he began his life of service. Starting his young career at Frank Hughes High School, Roger taught and coached basketball. Throughout his life, he ministered at Churches of Christ across Wayne and Lawrence counties. After settling in Collinwood, Roger joined the coaching and teaching staff at Collinwood High and Middle Schools from which he ultimately retired. Many of the young people he taught, coached, and mentored have gone on to become leaders themselves in the Wayne County community. Roger took a short break from educating others to serve two terms as Wayne County’s first County Executive. When not in the pulpit or in the classroom, Roger could be found on his farm tending to his sheep and horses or spending the night in the woods with his favorite dogs ‘coon hunting. Roger was proceeded in death by his parents and beloved brother, Barry Villines. He is survived by his loving wife, Sandra Ellen Villines of Waynesboro, daughter, Chrystie Turner of Brentwood, TN and son, Terry Villines of Los Angeles, CA; son-in-law Perry Turner of Brentwood, TN and two grandchildren Emily Turner of Brentwood, TN and Alex Turner attending school in Columbia, SC. The family would like to thank the doctors, nurses and staff at Wayne Medical Center for their kindness and care. No services are planned at this time. In lieu of flowers, please send a donation in Roger’s name to the charity of your choice.

The family of Roger T Villines created this Life Tributes page to make it easy to share your memories.

Send flowers to the Villines family.