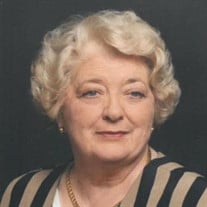 She always claimed being born in the same town as Elvis Presley, although 6 years earlier. Rosemary Patrick Landreth was born November 23, 1929 in Tupelo, MS, the first child of James Alvis Patrick and Rose Ella Jenkins Patrick. In the years to follow she would be introduced to four wonderful brothers. "Rosie", as she was so warmly called by those who knew her, spent the majority of her life in Selmer, TN. Her parents died while she was still young, but Lee & Adrian Jaggers were there to give her guidance. She would later work in their store, Jaggars Kiddie Shop. She attended nursing school and worked for a local dentist, Dr. Barr. Other employment included Welcome Wagon, substitute teacher at Selmer Elementary, helping manage a mobile home office for her brother Harold, and even working part time for her son David at Jones Exhaust. She also did volunteer work at McNairy County General Hospital. Rosie met the love of her life, Noel Pershin Landreth from Leapwood, TN and married in 1950. They remained married for nearly 50 years until his death in 1999. First Baptist Church of Selmer was like her second home. She was a Sunday School teacher and Sunday School director. She sang in the church choir and often sang solos. Her favorite song was "Teach Me To Pray" and her beautiful voice would hold everyone's intense attention. Sunday mornings and nights, Wednesday night Prayer Meeting, revivals and Vacation Bible School, if the doors were open, you would find her there. And what turned into a life long friendship was a group of young ladies known as YWA's - "Young Women's Auxiliary". She directed this group from high school into and through their adult life, and they would have a reunion every year around Thanksgiving. Since all of her siblings were boys and her two children were boys, she adopted this group of ladies as "her girls". When Rosie's life led her to McNairy County Healthcare Center, her faith went with her and aided her in teaching Sunday School in the dining room every Sunday after breakfast. Even with such a busy life, she found time to be a part of the Sewing Club, the Bridge Club, and the Stephen Foster Music Club. Entertaining and cooking for others were always special events in her life. She was famous for her homemade apple pie. And when others would not accept payment for services they had rendered, their reward most often was a warm, apple pie. It could be that's why they wouldn't accept money! All holidays were special, but none more so than Christmas. When the family got together, no gifts could be opened until the scriptures were read about the birth of Jesus, Christmas carols sung, followed by a special seasonal prayer. Within the family, she was known for her well planned "program". Preceding her in death was her husband, Noel P. Landreth; four brothers: Jimmy, Bill, Rhea and Harold Patrick; and granddaughter Amy Elizabeth Landreth. She is survived by son David (PD) of Panama City Beach, Florida; two grandsons, Wes (Sarah) of Adamsville, TN and Bailey (Julia) of Knoxville, TN; and two great-grandsons, Miller and Thomas. She is also survived by son Patrick (Nicky) of Selmer, TN and Nicky's daughter Anna Brooke Warren (Marty) and children Makenzi, Hayes and Eli, all of Tupelo, MS. The funeral service is being officiated by a special friend, Dr. Charles Fowler of Carson Newman University, Pastor Joey Johnson of First Baptist Church in Selmer, and former Pastor Matt Tomlin. Honorary pall bearers are "her girls". A private family Interment will follow at Oak Hill Cemetery. In lieu of flowers the family wishes donations be made to First Baptist Church of Selmer Building Fund. Attendees are requested to wear masks and observe all social distancing guidelines for the visitation and service. The funeral service will be live-streamed on Facebook Live through First Baptist Selmer's page.

She always claimed being born in the same town as Elvis Presley, although 6 years earlier. Rosemary Patrick Landreth was born November 23, 1929 in Tupelo, MS, the first child of James Alvis Patrick and Rose Ella Jenkins Patrick. In the years... View Obituary & Service Information

The family of Rosemary Patrick Landreth of Selmer, TN created this Life Tributes page to make it easy to share your memories.

She always claimed being born in the same town as Elvis Presley,...

Send flowers to the Landreth family.