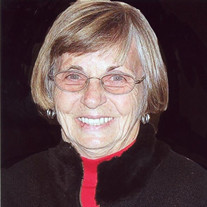 Ruby Nell Vise Stanfill departed this life on Sunday, September 20, 2020, at the age of 82 years, 10 months, and 2 days. She was born in Decatur County, Tennessee on November 18, 1937, the daughter of the late Elmer Enlo and Dovie Pauline Culp Vise. On February 13, 1955, she was united in marriage to Billy Wayne Stanfill. He preceded her in death on December 28, 2017, they were married for 62 years. Ruby Nell had worked for Brown Shoe Company and Savannah Ready Mix in Savannah, Tennessee, and S&S Asphalt in Lexington, Tennessee, where she was a bookkeeper until she retired. She was a member of the Olivet Cumberland Presbyterian Church, where she was also a member of the women's ministry, Olivet CPWM. Ruby Nell was also a member of 4-H, the Tennessee Walking Horse Association, and Band Boosters. Her family was her priority, but she always put God first. She was a beautiful loving woman, with a kind hearted soul, a big smile, and always putting others before herself. Ruby Nell enjoyed crafting, and was always cooking and baking, she was famous for her fried chicken and apple pies. Her children could always count on her to be involved in their activities, scouting, band, baseball, football, and softball. She loved all animals, especially her dogs, Missy, Prissy, and Trixie. Ruby Nell is survived by her children, Ronnie Wayne Stanfill and his wife Judy of Lexington, Tennessee, Vickie Nell Stanfill of Nashville, Tennessee, Jerry Ralph Stanfill of Lexington, Tennessee, and Therase Ann Stanfill of Nashville, Tennessee; grandchildren, Stephen Stanfill and his wife Julia, Stephanie Cagle and her husband Jerrod, Seth Stanfill and his wife Jessica, Tiffany Stanfill and her husband Jeff, JeriAnn Parker and her husband Scotty, and Christopher Stanfill; great grandchildren, Colby Cagle, Carly Cagle, Carson Cagle, Cayson Cagle, Drake Stanfill, Cooper Stanfill, Jaselyn Parker, Sadie Stanfill, Shae Stanfill, Spence Stanfill, and AnaBeth Stanfill. In addition to her parents and husband, Ruby Nell was preceded in death by a son, Franklin Enlo "Frankie" Stanfill; and brothers, Elmer Enlo Vise, Jr., Malcolm Ross Vise, George Hyder Vise, John D. Vise, and Henry Horton Vise. The family requests that those attending visitation and service, please wear a mask.

Ruby Nell Vise Stanfill departed this life on Sunday, September 20, 2020, at the age of 82 years, 10 months, and 2 days. She was born in Decatur County, Tennessee on November 18, 1937, the daughter of the late Elmer Enlo and Dovie Pauline Culp... View Obituary & Service Information

The family of Ruby Nell Vise Stanfill created this Life Tributes page to make it easy to share your memories.

Send flowers to the Stanfill family.