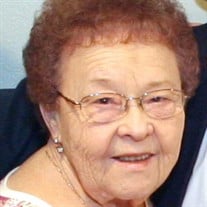 Shelby Jean White Leatherwood was born in Shiloh, Tennessee on October 22, 1938 to Jake and Maynard White. She was the first of five girls and one boy. Her brother, James White, is second oldest, followed by Kaye Donahoe, Gale Michie, Peggy Allen, and Patsy Taylor. She graduated high school at Southside High School in Counce, Tennessee. She shortly moved to Memphis and while living with her Aunt Virginia, met the love of her life, Charles Leatherwood. They were married on March 1, 1959. Shelby and Charles had two boys, Victor and Stephen. Shelby was preceded in death by her parents, Jake and May White, her husband, Charles Leatherwood and her sister, Mary Gale Michie. Shelby is survived by her sons, Victor Leatherwood and wife Carole of South Ogden, Utah and Stephen Leatherwood of Lee Summit, MO; grandchildren: Naomi Leatherwood, David Leatherwood and Christopher Inlow; brother, James Elvin White and wife Earline of Michie, TN; sisters: Kaye Donahoe and husband Bobby of Michie, TN, Peggy Allen and husband LeRoy of Leesville, LA, Patsy Taylor and husband Timothy of Arlington, TN. Shelby passed in the home of her youngest son on June 28, 2020 in Lee’s Summit, Mo. Her family was with her, holding her hands, as she took her last breathes. She was greatly loved. Early in life she became a professional cosmetologist and worked for about 9 years. She traveled across the U.S. with Charles as he worked as a journeyman electrician with the International Brotherhood of Electrical Workers (IBEW). She made great friends from coast to coast. Eventually, Shelby and Charles settled in Bradford, Tennessee. Shelby worked as a CNA at National Healthcare Corporation in Milan doing what she did best, caring for people. Shortly after retiring from NHC, she volunteered at the same medical facility for a number of years reading letters to patients and calling bingo. Shelby and Charles joined the Skullbones Church of Christ. Mom’s church family was of great importance to her. Shelby was a very devout Christian. She was often interrupted from her daily bible readings by one of her sons calling in the morning. She often shared her reading for the day with her son. She was a definite Light for Jesus and taught her family always. Even on her last days, she gave her bible to her daughter in-law Julie assuring the promise Julie would read it before accepting the gift. Shelby was a Rock. She crocheted kitchen towels that were very popular. She gave them to the family and everyone loved them. She even taught her younger sister how to make them. She was so giving. She would donate a box of towels to the Feminine Touch ladies’ group at the IBEW reunion so they could sell towels to raise funds for electrician wives. Visitation will be held Friday, July 3, 2020 from 9 am until service at 10 am all held at Shackelford Funeral Directors of Selmer, TN with Jack Walker officiating. Burial will follow in Mud Creek Cemetery in Adamsville, TN.

Shelby Jean White Leatherwood was born in Shiloh, Tennessee on October 22, 1938 to Jake and Maynard White. She was the first of five girls and one boy. Her brother, James White, is second oldest, followed by Kaye Donahoe, Gale Michie, Peggy... View Obituary & Service Information

The family of Shelby Jean White Leatherwood created this Life Tributes page to make it easy to share your memories.

Shelby Jean White Leatherwood was born in Shiloh, Tennessee on...

Send flowers to the Leatherwood family.