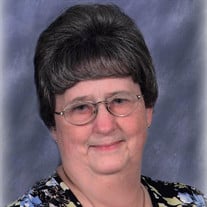 Shelia Dianne Henry was born May 11, 1948 in Finger, TN the daughter of the late Atlas and Roberta Brooks Plunk. She was united in marriage to Hershell Henry on April 22, 1967. Mr. Henry preceded her in death on October 9, 2013. In addition to her husband and parents, Mrs. Henry was preceded in death by a daughter, Deborah Dianne Henry; son, Christopher Michael Henry; two brothers, Garrey Talmadge Plunk and Stanley Ike Plunk. She leaves to cherish her memory a son, James Darryl Henry and wife Christina of Selmer, TN; two grandchildren, Sydney Nicole Henry and Derrick Christopher Henry; brother, James Roger Plunk and wife Carolyn; sister-in-law, Mary Jo Plunk; and a host of nieces, nephews and friends. Shelia loved to travel! She had visited 49 states, some multiple times especially Hawaii. She had also traveled to East and West Germany, Canada, Jamaica, The Bahamas, and Mexico. She traveled by airplanes, car and ships - she had been on several cruises and loved each one. Hawaii was one of her favorite places along with the Grand Canyon-she said it was the most beautiful place to see in person. The only state she had not visited was Alaska, she had plans to go with her son. She had a love for all things Elvis and had an entire room dedicated to her memorabilia. As much as she loved Elvis, she had a great love for Rodney McDowell. She had seen him in concert over 40 times. She also enjoyed making jewelry, bowling, and collecting salt/pepper shakers. Shelia had worked for the United States Postal Service for over 25 years. She attended Forty Forks Baptist Church in Bethel Springs. She will be greatly missed by her family and friends.

Shelia Dianne Henry was born May 11, 1948 in Finger, TN the daughter of the late Atlas and Roberta Brooks Plunk. She was united in marriage to Hershell Henry on April 22, 1967. Mr. Henry preceded her in death on October 9, 2013. In addition... View Obituary & Service Information

The family of Shelia Dianne Plunk Henry of Selmer, TN created this Life Tributes page to make it easy to share your memories.

Send flowers to the Henry family.