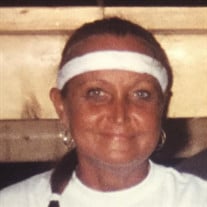 SHERRY WHEAT Henderson, TN: Sherry Jean Wheat age 68, passed away Monday morning May 3, 2021 at Jackson Madison County General Hospital. She was born January 8, 1953 in Jackson, the daughter of the late Vandon ‘Mann’ and Doris Parker Williams. She grew up in Jackson and attended Northside High School. She married Dennis Dudley, Sr. on September 22, 1969. They made their home in Jackson. He preceded her in death on October 6, 2000. She worked at Ragan’s Convenience Store for many years. She was an avid animal lover. She was a loving and devoted mother and grandmother and a Baptist in belief. Ms. Wheat is survived by two daughters, Wendy Coady of Henderson and Chastity Harris and husband Jeff of Henderson and a son, Dennis Dudley, Jr. of Jackson; four grandchildren, Madison McCaskill, Jake McCaskill, Levi Harris and Charlie Harris; a brother, Glenn Roberts of Jackson and two sisters, Janice Webb and husband Vann of Brownsville and Donna Sutton of Paris, TN and a special Cousin, Jodie Parrish of Jackson. She was preceded in death by her parents and her first husband, Dennis Dudley, Sr. Memorial services will be 7:00 PM Thursday, May 6th at Shackelford Funeral Directors – Crook Avenue with Bro. Rick Babin officiating. The family will receive friends at Crook Avenue 5 PM until 7 PM service time Thursday. In lieu of flowers memorials may be sent to Chester County Animal Hospital, payable to Chester County 4 Paws, at 952 West Main Street, Henderson, TN 38340 or mailed in care of, Jan Morris, 951 Hearn Street, Henderson, TN 38340. Shackelford Funeral Directors of Henderson 731-989-2421

The family of Sherry Wheat - Henderson created this Life Tributes page to make it easy to share your memories.

Send flowers to the Wheat family.