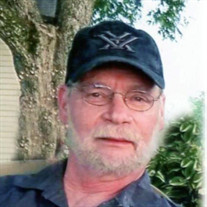 Steven Jay Gagyi departed this life on Tuesday, August 24, 2021, at the age of 70 years, 1 month, and 19 days. He was born in Cincinnati, Ohio, on July 5, 1951, the son of the late Ernast J and Janet Louise Kern Gagyi. On August 25, 1973, he was united in marriage to Patricia “Patti” Lynn Connor, who survives. Steve was a tool and die machinist for Trico in Lexington, Southern Tooling in Lexington and Butcher Boy Machines, Inc in Selmer, Tennessee. He was a member at First Baptist Church in Adamsville, Tennessee. Steve also loved hunting and fishing passing the skills attained over the years to his sons and granddaughters. He also loved coaching baseball to kids of all ages from when his family lived in Texas and then when they moved to Tennessee. He was a gearhead who preferred American Motor Company and anything that would go fast. He loved his wife, his sons, and grandchildren. He loved the time spent at the ballfield with team players over the years. Steve is survived by his wife of 48 years, Patti Gagyi of Adamsville, Tennessee; sons, Christopher Gagyi and his wife Tonya, Derek Gagyi and his wife Ashley, all of Adamsville, Tennessee, and Andrew Gagyi and his wife Samantha of Counce, Tennessee; grandchildren, Hannah Gagyi, Sarah Gagyi, Hayley Gagyi, Piper Gagyi, Presley Gagyi, Austyn Gagyi, Peyton Gagyi, and Riley Gagyi; sisters, Marcia Mowell of Cincinnati, Ohio, Donna (Jerry) Alexander of Frostproof, Florida; brother, Lee (Susan) Gagyi of Downey, California; sister-in-law, Deborah Mains of Cincinnati, Ohio; brother-in-law, Michael Connor of Kentucky; and a host of nieces and nephews. Steve was preceded in death by both of his parents and in-laws, Charles “Doc” and Gertrude Connor, brother-in-law, Tom Mowell, and sister-in-law, Barbara Connor.

The family of Steven Jay Gagyi created this Life Tributes page to make it easy to share your memories.

Send flowers to the Gagyi family.