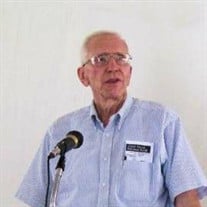 TEDDY DEAN LINGREN Born Teddy Dean Lingren at a country house near Harcourt, Iowa to Herbert Nathaniel and Zula Melissa Bolton Lingren on April 1, 1938. He is the youngest of 3 boys. His brothers are Hebert Lingren, Ronald Lingren and Charles Lingren. Zula Melissa Bolton was born in Springville, Iowa about 1900. She was a grade school teacher for more than 25 years, most of the time at Lanyon, Iowa. She passed away in May 1986. Herbert Nathaniel Lingren was born near Boxholm, Iowa in 1892. He was a farmer all his life. He passed away in June 1958. Ted was raised on an Iowa farm, rising at 6 a.m. to milk cows, feed chickens and clean the cow barn. In the evening, 4-6 p.m., after school, the same routine was done. After graduating from high school in 1956, Ted enlisted in the Air National Guard of Iowa. He completed 3 years in the Air Force Reserves and received an honorable discharge in May 1959. He then reenlisted in the Air Force Reserves for another 3 years and received an honorable discharge in May 1962. During this time, he also attended Iowa State University in Ames, Iowa to study for a degree in Farm Operations. He graduated with 3 minors; economics, agronomy, & animal husbandry. In 1960, he graduated with a B.S. in Agriculture. In 1961, Ted volunteered to go to Vietnam with International Voluntary Services (IVS); a USAID contract; He organized a Koho Hilltribe Extension Team in Vietnam to do Village Development; He also worked with research on varieties of various crops. In 1963, Ted was a recruitment officer with IVS in Washington, D.C. He recruited college graduates in agriculture for work in Laos, Cambodia and Vietnam. While getting his master’s in Research Rural Sociology at Iowa State University in 1964-1965, he met the lovely Helon Karen Shappley from Memphis, TN. They married in June of 1966. Ted had a USAID contract in Thailand, so they moved there 5 months after they were married. He was the advisor to the Border Patrol Police School teachers for 300 primary schools along the borders with Burma, Laos, and Cambodia. He became a New Testament Christian in 1965. On May 22, 1968, their first daughter, Kimberly Dawn, was born in Chiang Mai, Thailand. In 1969, Ted decided to become a full time missionary, so he went to S.E. College of the Bible/IBC (now Heritage Christian University) and received a B.S. Degree in Bible. The Lingren family became missionaries to Thailand and Laos with the Salem church of Christ in Florence, AL. On Feb. 19, 1970, their second daughter, Laura Renee, was born in Florence, AL. Ted began as a missionary in 1970 at Bangkok, Thailand to set up and operate a country-wide, Thailand Bible Correspondence course in the Thai language; 180,000 people were signed up in the first 3 1/2 years. On Oct 30, 1972, their third daughter, Michele Annette, was born in Bangkok, Thailand. From 1974-1975, the Lingren family were the first missionaries to live In Laos; Ted helped set up a Bible correspondence program and a Bible training center in Vientiane, Laos. 474 were baptized into Christ and 8 congregations established in 1 1/2 years. A communist take-over in 1975 necessitated evacuation to N.E. Thailand. He stayed for 2 1/2 months under the communist regime in Laos, but mission work couldn’t be accomplished! After evacuating to Thailand from Laos in late 1975, Ted and his family lived in Nongkhai, Thailand where they set up Bible schools to win souls and train men in the Lao and Cambodian Refugee camps at Nong Khai, Nakorn Phanom & Surin provinces along the Thai border. Ted also worked to establish monthly two-week bible training schools in 14 of the provinces in N.E. Thailand. During 1976-1992, more than 6,500 were baptized into Christ (many in the refugee camps) and 80 + congregations were established in N.E. Thailand. In 1993, Ted and Karen moved to work in the Philippines. On Panay, Negros and Mindanao Islands congregational a WBS (weekend bible schools) 3+ year study was set up. They lived and labored there until June 2004 when Karen passed away from cancer. Ted continued to travel to Thailand, Laos and the Philippines continuing to preach and teach in WBS (weekend bible schools). Ted spoke, read and wrote the Thai and Lao language fluently. He learned to speak and read Ilonggo, but since the Philippines speaks predominantly English, he forgot most of it. Ted has three sons in laws-Paul Powers, Daryl Shackleford and Samrit Kammanee. Ted also has seven grandchildren-Jared Powers, Lydia Powers, Dean Shackleford, Luke Powers, Drew Shackleford, Gaby Kammanee and Annie Kammanee. In lieu of flowers, the family has requested that donations be sent to the Lingren Mission Fund to continue the work of the Lord in Southeast Asia and the Philippines. West 160 Church of Christ Lingren Mission Fund P.O. Box 1004 West Plains, MO 65775 Memorial services will be 11:00 AM Saturday, January 8, 2022 at South Jackson Church of Christ. The family will receive friends Saturday, 10:00 AM until 11:00 AM service time at South Jackson Church of Christ Shackelford Funeral Directors of Henderson 731-989- 2421

TEDDY DEAN LINGREN Born Teddy Dean Lingren at a country house near Harcourt, Iowa to Herbert Nathaniel and Zula Melissa Bolton Lingren on April 1, 1938. He is the youngest of 3 boys. His brothers are Hebert Lingren, Ronald Lingren and Charles... View Obituary & Service Information

The family of Ted Lingren - Henderson, TN created this Life Tributes page to make it easy to share your memories.

Send flowers to the Lingren family.