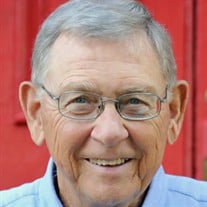 Born in Memphis on December 20, 1934, Terry Newton Brown of Bolivar, Tennessee, passed away Monday, August 24, 2020, at Jackson-Madison County General Hospital. He was the son of the late Icy Faye Terry Brown and Jeff N. Brown and was preceded in death by a sister, Joe Ann Brown; and his wife of 54 years, JoAnn VanBlake Brown, who passed away in 2008. Mr. Brown attended Guthrie Elementary School and graduated in 1952 from Humes High School in Memphis, Tennessee. He attended Memphis State University and served in the United States Army both in Germany and stateside from 1958-1962. In the summer of 1964, he and JoAnn moved to Bolivar, Tennessee. He was employed with Harman Automotive, Inc. for over 30 years where he served as a purchasing manager and then retired from All-Steel in Jackson, Tn. from their purchasing department. He and his wife joined First Baptist Church in 1965, where Mr. Brown served in many capacities including Deacon, Sunday School Teacher, Chairman of the Finance Committee and drove the church van. His service to the community included membership in the Bolivar Civitan Club, serving in the Loaves and Fishes Ministry, and serving as Grand Jury Foreman. He also served on the Board of Directors at both Bolivar Electric, Bolivar Country Club and West Tennessee Industrial Association for many years. While a member of the Country Club, he enjoyed playing golf each week with his friends. Mr. Brown was a gentle, kind man, who impacted his family and his friends deeply by his Christian values and strong moral compass. He served the Lord with humility and was a true man of God that loved his family unconditionally. He served not to be noticed, but to do what was right. He lived by the mantra that legacy is not leaving something for people, it is leaving something in people. He was always quick to sport a smile, but it was always the biggest when Taylor was around. He was proud of Taylor’s love for the Lord and enjoyed attending all of his sporting events, including watching him play baseball at the college level. He will always be admired for his humble, gentle and jovial demeanor. He always had a smile on his face. We are so thankful for what he left in us – memories, grateful hearts, and most importantly how to serve and walk with Jesus Christ. Survivors include two daughters, Holly Brown and Amy Brown Howell of Jackson; one beloved grandson, Taylor Howell of Jackson; two sisters, Betty (Johnny) Mize of Byhalia, MS, and Sandra (Joe) Lindsay of Slidell, LA. Also surviving are a host of nieces and nephews that he enjoyed spending time with and dearly loved. The family requests that memorials be sent to Bolivar First Baptist Church. While visiting or attending services for Mr. Brown, please consider the following guidelines: * Maintain 6 feet between yourself and the next closest person; * Refrain from hugs and handshakes; * When you sneeze or cough, use your elbow to cover your nose and mouth; * Wash your hands often; * Avoid touching your face; and * Minimize time spent in places where people gather. Thank you for your consideration.

Born in Memphis on December 20, 1934, Terry Newton Brown of Bolivar, Tennessee, passed away Monday, August 24, 2020, at Jackson-Madison County General Hospital. He was the son of the late Icy Faye Terry Brown and Jeff N. Brown and was preceded... View Obituary & Service Information

The family of Terry N. Brown created this Life Tributes page to make it easy to share your memories.

Send flowers to the Brown family.