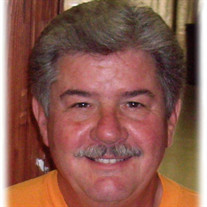 Terry Lynn Turnbo of Columbia, TN passed away suddenly on Saturday, October 3, 2020 at his home at the age of 67 years. He was born in Lewis County Boyce Clinic on March 25, 1953, a son of the late Howard and Dorothy Turnbow Turnbo. Terry... View Obituary & Service Information

The family of Terry Lynn Turnbo, Columbia, TN created this Life Tributes page to make it easy to share your memories.

Send flowers to the Turnbo family.