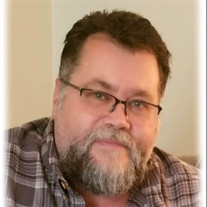 Timothy Wayne Holt was born in Savannah, Tennessee on August 7, 1967, the son of Kenneth Ray and Lavern (Sussie) Halford Holt. On July 21, 2012, he was united in marriage to Holly Beth Howell, who survives. Timothy received his Doctorate of Pharmacology from University of Tennessee at Memphis, he also served his residency in Memphis.  Upon completion of residency, he relocated to Fort Worth, Texas to open Teddy Bear Pediatric Home Infusion Company.  Later Dr. Holt was transferred to Mercy Children’s Hospital in Kansas City, Missouri as Director of Pharmacy.  Then, upon returning to Tennessee, Dr. Holt hired on as a Pharmacist at Loretto Drugs, has been employed there the last 17 years. Timothy was a member of the Riverside United Methodist Church in Clifton, Tennessee.  He was also actively involved in a Medical Mission Team in Sinaloa, Mexico.  Tim’s hobbies include working on cars/motorcycles, staying busy with his father, Kenneth.  Tim loved working with animals, which included his horses and dogs.  Tim known as “Sweet Baby” loved to travel with his wife, Holly “Habibi”.  One of his greatest joys was being baptized in the Jordan River.   Timothy departed this life on Saturday, February 20, 2021, in Columbia, Tennessee at the age of 53 years, 6 months, 13 days.   He is survived by his wife of 8 years, Holly Howell Holt of Clifton, Tennessee; children, Isabella Ashley Holt and her fiancée, Chris Cooper of Clifton, Tennessee, Christopher Wayne Holt, Las Vegas, Nevada; parents, Kenneth and Sussie Holt of Clifton, Tennessee; brother, Keith Holt and his wife Lisa of Savannah, Tennessee; nephews, Kyle Holt, and Kaden Holt; and a host of additional nieces and nephews.   Memorial Donations may be made to Riverside Cemetery Maintenance Fund C/O Sussie Holt at 3111 Tom Holt Road, Clifton, Tennessee 37405 or to the Medical Missions Team C/O Lorri Cooke, P.O. Box 676, Clifton, Tennessee 38425.

Timothy Wayne Holt was born in Savannah, Tennessee on August 7, 1967, the son of Kenneth Ray and Lavern (Sussie) Halford Holt. On July 21, 2012, he was united in marriage to Holly Beth Howell, who survives. Timothy received his Doctorate of... View Obituary & Service Information

The family of Timothy Wayne Holt created this Life Tributes page to make it easy to share your memories.

Timothy Wayne Holt was born in Savannah, Tennessee on August...

Send flowers to the Holt family.