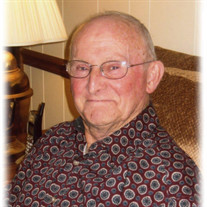 Tommy Joe Briley departed this life on Tuesday, January 5, 2021, at the age of 89 years, 9 months, and 27 days. He was born in Cornersville, Tennessee on March 9, 1931, the son of the late Lester Donald Briley and Ina Pauline Blasingim Briley.... View Obituary & Service Information

The family of Tommy Joe Briley created this Life Tributes page to make it easy to share your memories.